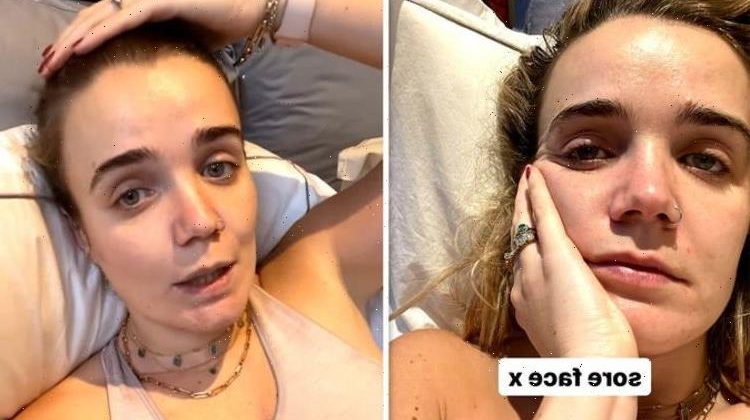 Emily Clarkson, daughter of former Top Gear presenter Jeremy Clarkson, has shared her latest health update with her 228,000 followers. The star added a “stabbing pain” in her collar bone to her growing list of nasty-sounding ailments.

The news comes five days after Emily took to Instagram clutching a sore, swollen face and complaining about the agonising pain she was in due to a mysterious problem related to her jaw.

On her story, the influencer released another photo with her hand pressed against her cheek with the caption: “Sore face.”

“I do not know what is happening to my face,” she said in a video one hour later.

“All I do know is this seems hella unfair,” (sic) she continued, pointing to a patch of angry looking skin on her left cheek.

“I’ve also developed this stabbing pain into my collarbone so that’s great.

“I don’t know if the antibiotics are working or if they should be working any quicker.

“I don’t know what is happening. I’m going to go and see the surgeon today.

“I haven’t washed my hair in six days, can you tell?” she asked, playing with her hair.

“I’m going to try and see the surgeon today or tomorrow, whenever they have some time, just to check in because this is not it.”

Five days ago Emily took to her story to talk about her painful jaw, writing: “Feel so stupid moaning about this, but the pain is so stressful.

“It’s swelling on this side,” her caption read as she clasped the area of skin in her hand, before adding: “And just hurting so much.

“I also have a bit of bruising along my jawline on the right side?”

‘Gutted’ Matt Dawson speaks out on Question of Sport exit: ‘How?’ [UPDATE]

Emily previously revealed that she broke her jaw during the pandemic and required surgery to reset it, perhaps explaining why it has again begun to hurt.

She referred to her condition as “TMJ pain”, in reference to the temporomandibular joint, which connects the jaw bone to the skull.

Experts say that TMJ disorders can cause pain in the jaw joint and in the muscles that control its movement, but there is no news as yet from Emily over whether she officially has such a condition, following the accident that broke her jaw.

However, she did tell her followers of her intentions to get medical Botox around the jaw, using a neurotoxin normally used to prevent wrinkles by reducing movement in the area.

Later today, Emily posted another video of herself lifting weights with the caption: “Not me just CURING myself x”.

Soon after she posted another picture where she looked slightly bemused, writing: “Arguably that made it worse hahaha.”

In another candid snap posted to her story earlier today, the star also penned: “Feel like my life is just d*ing around and then moaning that it hurts but I have decided December is going to be a month of good vibes.

“The content won’t always make sense but every day I will do something stupid and hope that it makes you smile.”