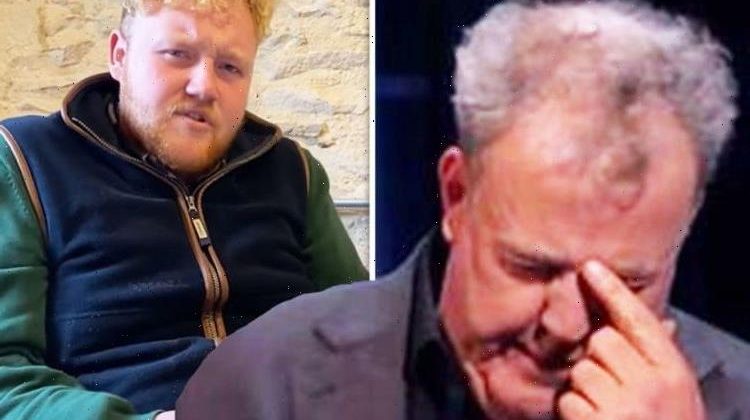 Jeremy Clarkson explained he suffered a costly accident that caused “substantial damage” on his Oxfordshire farm in a candid admission. The Clarkson’s Farm presenter added that the accident didn’t go down well with his co-star Kaleb Cooper, 21, who ripped into the former Top Gear host.

The 61-year-old revealed he crashed his Lamborghini tractor while farming his land.

The TV star sought assistance from the young farmer who was not impressed about the situation.

Jeremy detailed all in his latest column, as the Grand Tour star admitted he crashed someone else’s tractor.

The farmer revealed he drove the £20,000 machine into a “lone telegraph pole in a 52-acre field”.

He wrote: “I saw the pole coming from way back. And I watched it grow larger in the windscreen. And then I hit it.

“Actually, that’s not strictly accurate. I didn’t hit it. Nor did the tractor. But a wing of the six-metre-wide disc the tractor was towing did, at 17kph. The damage was substantial.

“Not only to the pole which carries a 13,000-volt cable, by the way, but also to the disc. Two of the box section steel arms were pretty much snapped off.”

Jeremy said that the costly tractor did not belong to him adding, it “wasn’t mine”.

He shared that he had been discing the field which includes disturbing and exposing the soil.

Kaleb eventually turned up to his farm to assist Jeremy after the horror accident.

“And then finally a pick-up truck came bumping over the field containing a man with white knuckles and a tempersome face,” he wrote.

“‘How’ve you done that?’ he asked crossly, before the door was shut,” Jeremy continued in his latest column for The Times.

“‘Dunno sir,’ I mumbled. ‘Can’t you do anything properly?’ he wanted to know in a hands-on-hips type of way.”

The presenter revealed the brakes on his tractor had not been working properly during his latest incident.

Kaleb probed Jeremy on why he had been discing the field when it had already been done as he banned the Clarkson’s Farm host from using tractors in the future.

He went on: “I hadn’t even had a chance to answer before his voice went up a couple of octaves and he really let rip.

“After a bit of swearing and name-calling, there was an observation that even a child can tell a bit of field had been disced because ‘one bit’s brown and one bit’s green.'”

As Kaleb headed off, Jeremy made an observation after the young farmer drove off in a white van when he usually travels in a black vehicle.

After some investigations, the TV personality found out that Kaleb had in fact driven his black van into a wall that same day.