Jennifer Lopez expertly avoided a question about her rekindled romance with Ben Affleck during a new interview with Hoda Kotb. Watch the clip here!

Jennifer Lopez, 51, is not ready to talk about Ben Affleck, 48, just yet. Although Bennifer has been getting hot and heavy over the last few months, the “Let’s Get Loud” songstress avoided a question about the rekindled romance while speaking to Today‘s Hoda Kotb for an interview on July 20. Jennifer was doing the interview alongside Lin Manuel Miranda to promote their new song “Love Make the World Go Round” in honor of the 5-year anniversary of the tragic Pulse nightclub shooting when Hoda, 56, told the singer that she looks “happy.”

“I am happy. I’m always happy when you see me Hoda,” Jennifer responded. Hoda then said that the mom of two looks “happier,” before directly mentioning her relationship with Ben, 48. “Look, I just have to tell ya. Every time I see a picture of you and Ben, I’m like, ‘She looks happier, she looks happier,’ ” Hoda said. “Are we happier?” After taking an awkward pause, Jennifer expertly diverted Hoda’s question back to her music. “The song is out, it’s been five years since we done it and I believe that message of loving one another and coming together and love is never more relevant that it is now,” the Hustlers actress said.

Hoda cracked a smile and laughed over Jennifer’s response, and then said to the star, “Wait, it’s me you’re talking to, you know that.” “I know,” Jennifer said. “You can call me. You have my number!” This was the first interview that Jennifer has been directly asked about her relationship with Ben since the singer and Argo actor got back together in April following Jen’s split from Alex Rodriguez. Sadly, Bennifer fans did not get the response they were hoping for! 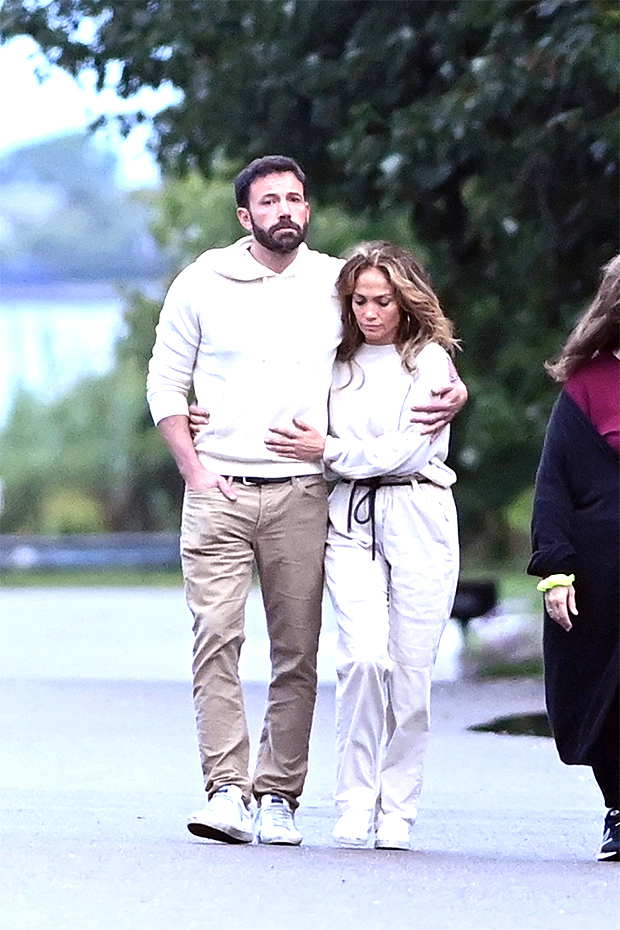 Jen and Ben —who were engaged from 2002 – 2004 before calling off the nuptials and splitting — have been inseparable in the last few months. Most recently, they were seen house hunting together in Los Angeles, during which they shared a romantic kiss in Ben’s car. Before that, they spent some quality time with their kids around L.A. and near Jen’s estate in the Hamptons. Ben’s son Samuel, 9, joined Jen’s twins Max and Emme, 13, for an action-packed day at Universal Studios on July 2, and then the couple and their kids were spotted at a blended family hangout at the Brentwood Country Mart on July 9.

Though Jen has not spoke about her romance with Ben, she did say in a July 5 interview with Apple Music’s Zane Lowe that she’s having “the best time of my life” as of late. She also insisted to her fans that, in the wake of major life changes, she’s doing just fine. “I’m super happy. I know people are always wondering, ‘How are you? What’s going on? Are you okay?’ This is it. I’ve never been better,” she said.