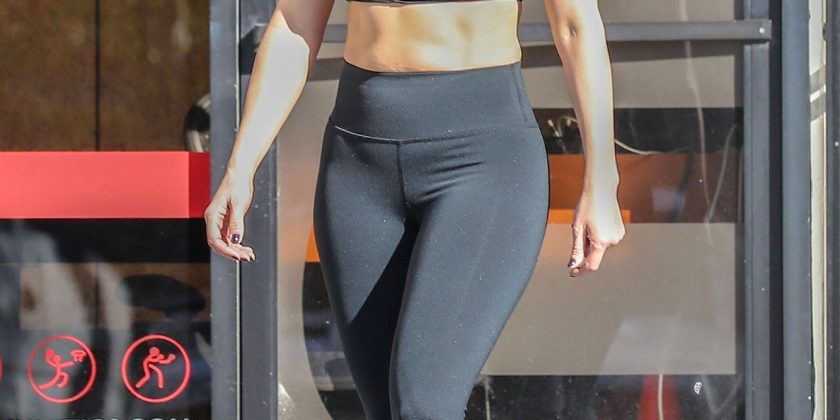 Jennifer Lopez flaunts the results of her workout after a trip to the gym with boyfriend Alex Rodriguez (not pictured) in Venice Beach, California, on Tuesday.

Selena Gomez kept it simple and sporty in all black, as she stepped out in Los Angeles after a Hot Pilates class.

Dua Lipa soaked up the sun in Miami, sporting a yellow bikini, with her sister and boyfriend.

Quavo of the group Migos, 2 Chainz and Alex Gidewon spent time together at a party on Saturday in Atlanta.

Robin Thicke kept it classy in a navy suit while attending an event at Palms Casino Resort in Las Vegas on Sunday.

Ja Rule posed for a photo backstage in New York City over the weekend.

Selena Gomez wears a Balenciaga turtle neck during her Saturday out in Beverly Hills, California.

Serena Williams holds an adorable baby for a selfie with a fan during the Mastercard Hopman Cup 2019 in Perth, Australia, on Sunday.

Bella Hadid has her headphones handy while out and about in New York City on Saturday.

Lady Gaga soars above the stage in Las Vegas while kicking off her Enigma concert residency at Park Theater at Park MGM on Friday.

Trevor Noah embraces his inner kid alongside Frozone and Mr. Incredible at Pixar Pier at Disney California Adventure Park in Anaheim on Friday.

Jamie Chung and Justin Hartley link up at the Mott 32 restaurant opening in Las Vegas on Friday.

Adam Lambert and Katy Perry show support for Lady Gaga backstage at her debut Enigma show at the Park Theater in Las Vegas on Friday.

Joe Jonas and fiancée Sophie Turner hold hands as they leave a double date with newlyweds Nick Jonas and Priyanka Chopra at Sketch in London on Friday.

Rita Ora looks classic in a black dress and red lipstick while performing on the Graham Norton Show in London on Friday.

Lin-Manuel Miranda is all smiles as he arrives at the airport in Isla Verde, Puerto Rico, where he announced new dates for Hamilton performances on the island.

Venus and Serena Williams hug it out after Venus wins their match at the opening day of the Mubadala World Tennis Championship in Abu Dhabi on Thursday.

Friday in West Hollywood, Kaia Gerber looks chic in jeans and a blazer as she leaves Peppermint club after Dave Chappelle and John Mayer’s performances.

Johnny Depp dresses up as his iconic Pirates of the Caribbean character Jack Sparrow while meeting with children during his visit to the Curie Institute in Paris on Thursday.

Mariah Carey, Carly Steel and Rebel Wilson snap a sweet selfie while out to dinner at Caribou Club in Aspen on Thursday.

Iggy Azalea performs on Thursday after one of her backup dancers suffered a seizure onstage in Rio de Janeiro, Brazil.

Kristen Stewart and rumored girlfriend Sara Dinkin continue their streak of public appearances this week, grabbing lunch together in Los Angeles on Thursday.

Mark Wahlberg and wife Rhea Durham hold hands on a walk in Barbados on Thursday.

Selena Gomez wears a hoodie from BFF Taylor Swift’s Reputation tour while out and about in Los Angeles on Wednesday.

Vanessa Hudgens and boyfriend Austin Butler go for a stroll in L.A. on Wednesday.

Sandra Lee celebrates the holidays with her family in Strasbourg.

Justin Theroux takes his dog for a walk in N.Y.C.’s SoHo neighborhood on Wednesday.

Adam DeVine and girlfriend Chloe Bridges pose together as the Los Angeles Clippers take on the Sacramento Kings at Staples Center on Wednesday in Los Angeles.

Wednesday in New York City, Katie Holmes looks giddy as she glances at her phone while grabbing her morning coffee.

Alessandra Ambrósio plays a game of beach tennis on Wednesday in Brazil.

Mark Wahlberg takes a dip after arriving at a hotel in Barbados with his family on Wednesday.

Mariah Carey and boyfriend Bryan Tanaka are feeling the holiday cheer while doing some last minute Christmas shopping in Aspen on Monday.

Kate Middleton and Meghan Markle smile together at the Christmas Day Church service on the Sandringham estate on Tuesday in King’s Lynn, England.

Jake Gyllenhaal is seen carrying unwrapped boxes and bags in N.Y.C. on Monday.

Emma Roberts steps out in a baseball hat and sunglasses to finish up some last-minute Christmas shopping in Los Angeles on Monday.

Newlyweds Nick Jonas and Priyanka Chopra hold hands as they leave 34 Mayfair restaurant in London after dinner with Joe Jonas and Sophie Turner on Christmas Eve.

Wyatt Russell holds hands wth girlfriend Meredith Hagner as the two do some Christmas shopping in Aspen on Monday.

Another day, another outing for Selena Gomez, who visits a friend in L.A. on Sunday.

Before hitting the epic Kardashian Christmas party, Jennifer Lopez and Alex Rodriguez do some holiday shopping at The Grove shopping center in L.A. on Monday.

Kristen Stewart and stylist Sara Dinkin continue their week of outings in Los Angeles on Monday.

Molly Sims, her husband Scott Stuber and their kids Brooks and Scarlett snag front-row seats for the Memphis Grizzlies vs. Los Angeles Lakers basketball game at Staples Center in L.A. on Sunday.

Ellen Page and wife Emma Portner sit back and relax during the Philadelphia Flyers vs. New York Rangers hockey game in N.Y.C. on Sunday.

Zayn Malik keeps it low-key for a New York City outing on Sunday.

Goldie Hawn bundles up on Sunday for her family’s annual Christmas trip to Aspen, Colorado.

Adam Levine and Behati Prinsloo take a selfie with a pal during the Los Angeles Lakers vs. New Orleans Pelicans basketball game at L.A.’s Staples Center on Friday.

Luann de Lesseps sits atop a sparkly sleigh fit for a countess during her holiday cabaret show at The Paramount in Huntington, New York, on Friday.

Laverne Cox glows at Catch in West Hollywood on Sunday.

Kylie Jenner rocks a festive look for the season in Los Angeles on Saturday.

Angela Bassett — who famously played Tina Turner in the 1993 film What’s Love Got to Do with It — links up with Tina: The Tina Turner Musical star Adrienne Warren backstage at London’s Aldwych Theatre on Friday.

Amid her reunion with Offset, Cardi B performs at the Electric Holiday Concert at the Puerto Rico Convention Center in San Juan on Friday.

Luke Wilson flashes a grin while out and about in L.A. on Friday.

Johnny Depp, guitar in hand, arrives in Paris on Friday after taking the train from London.

Amanda Bynes keeps her eye on her phone during an outing in Los Angeles on Friday.

Newlyweds Priyanka Chopra and Nick Jonas smile together at their latest wedding reception in Mumbai on Thursday.

Ellie Goulding performs a charity concert at the SSE Arena Wembley in London on Thursday.

Mark Ronson, Mikey Cyrus and host Jimmy Fallon sip some eggnog after Miley sings a feminist version of “Santa Baby” on Thursday’s episode of The Tonight Show in N.Y.C.

Thursday in N.Y.C., Steve Carell stops by the 92nd Street Y to discuss Welcome to Marwen after the film’s screening.

Jennifer Lawrence looks chic in a yellow Burberry teddy coat as she heads to a salon in N.Y.C. on Wednesday.

Kate del Castillo holds up a shot glass at a press conference at Club 51 in Mexico City on Thursday.

Queer Eye’s Jonathan Van Ness turns the sidewalk into a runway on Thursday in L.A.

RuPaul turns and smiles for the camera on Thursday’s episode of The Late Late Show with James Corden in L.A.

Dakota Johnson picks up some gift wrap on Thursday while walking around L.A.

Jennifer Lopez joins Alex Rodriguez in Malibu while he finishes shooting a commercial on Thursday.

Donnie Wahlberg poses with arms wide open on the set of Blue Bloods on Thursday in N.Y.C.

Lindsay Lohan is seen out and about in a white puffer coat on a rainy day in N.Y.C.’s SoHo neighborhood on Thursday.

Dua Lipa performs at the Ellie Goulding for Streets of London charity gig at the SSE Arena Wembley in London on Thursday.

Jake Gyllenhaal and Amy Adams keep it neutral on Thursday for a special reception for her film Vice in N.Y.C.

T.I. spreads some holiday cheer in Atlanta, popping into various charity organizations with presents on Thursday on behalf of his Harris Community Works foundation.

Gisele Bündchen celebrates the launch of her campaign for the Vivara jewelry brand in São Paulo, Brazil, on Wednesday.

Michelle Obama talks about her book Becoming with Sarah Jessica Parker at Barclays Center in Brooklyn, New York, on Wednesday.

Jennifer Garner is spotted out in Los Angeles on Wednesday.

Paris Hilton and Jenny McCarthy twin in Santa hats and black sunnies while chatting about Hilton’s new Netflix documentary The American Meme on The Jenny McCarthy Show at SiriusXM studios on Wednesday in N.Y.C.

Winston Duke arrives at an MCM X GQ celebration in his honor on Wednesday in Beverly Hills.

Joe Biden meets star Jeff Daniels backstage at the Broadway production of To Kill a Mockingbird on Wednesday.

Luann de Lesseps gets into the holiday spirit during her Holiday Cabaret Show at Gramercy Theater in N.Y.C. on Wednesday.