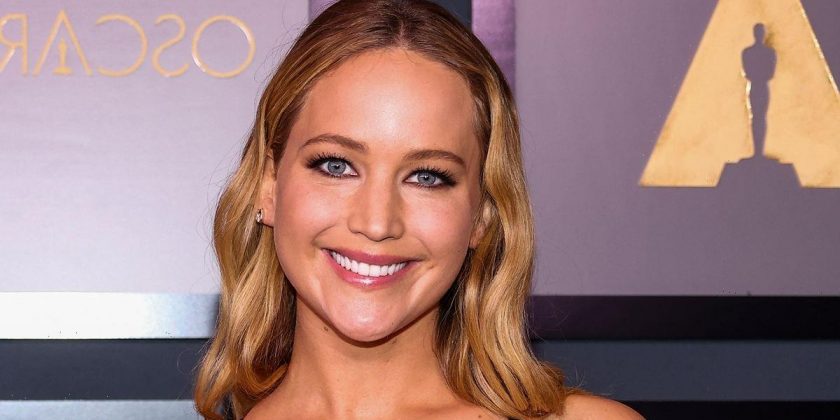 Jennifer Lawrence was spotted taking her baby Cy to the playground as she enjoyed some mum and son bonding time with her little one at the park in Los Angeles.

The Hollywood actress, 32, opted for a completely natural look as she smiled and played with her tot in public, in a rare move of openness for a celebrity A-lister.

At one point, the duo played and giggled away as the proud mum-of-one pushed Cy on the baby swings.

While in another sweet moment, Jennifer pushed her tot down the slide.

The star chose a pair of black leggings, matching tank top, and a loose cream sweatshirt for the outing.

She bundled her 10-month old youngster up in a teddy fabric jumper, black Converse sneakers and a pair of quirky navy and pink patterned trousers for the outing.

While Jennifer exposed her ankles and slipped on a pair of Sherpa slide sandals and tie-dye socks for the trip.

With her caramel blonde locks in a messy top bun, Jennifer went makeup-free and showed off her fresh face with a pair of black sunglasses propped up on her head.

The star then accessorised with a series of necklaces. Jennifer is married to New York art gallery owner Cooke Maroney, whom she met in 2018 via a mutual friend.

The pair had a whirlwind romance and were engaged less than a year later.

They then welcomed their first son, Cy, in February this year.

Ever since The Hunger Games franchise, Jennifer has slipped out of the spotlight in Hollywood, choosing to make more indie movies instead of mainstream.

In a recent interview with fellow actress Viola Davis in Variety magazine's Actors on Actors series, Jennifer revealed how hard it had been to make one particular film through her marriage and subsequent pregnancy – critically-acclaimed Apple TV+ movie Causeway.

"I made the movie right before I got married. And then we had the pandemic," the star explained.

"Two years later, I'm pregnant, we go back, and we make the rest of it.

"It was the scariest thing in the entire world to think about making a family."