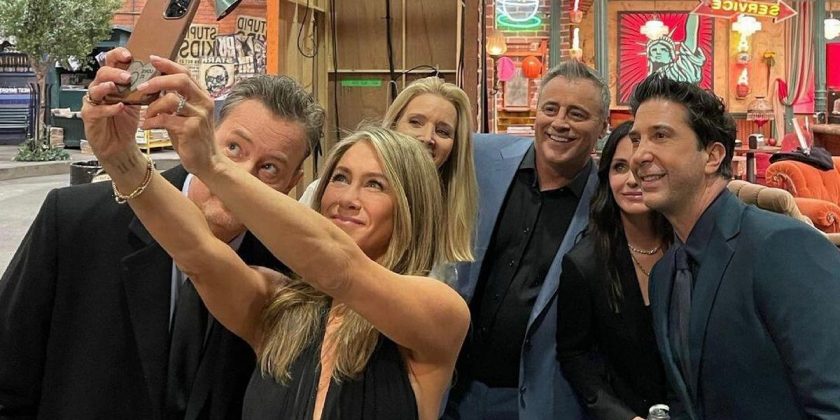 The 52 year old, whose co-star Matthew Perry was recently defended by the reunion director after receiving "unkind" remarks, took to her Instagram feed to post a series of photos for her 37.2million followers to revel in.

In the caption, she wrote: "Still basking in all the love from the #FriendsReunion. Thank you each and every one of you," followed by a red heart emoji.

She continued: "Swipe for… The bazillionth selfie taken with the five of us… When two TOTALLY different worlds collide – @_schwim_’s face says it all ☺️ … The legend himself, our director of the first season, Papa James Burrows," with a pink heart emoji.

The first picture showed the actress slouched down as she positioned her phone to fit all her former co-stars into the frame, including Lisa Kudrow, 57, who portrayed Phoebe Buffay, Courteney Cox, 56, who played Monica Geller, David Schwimmer, 54, who portrayed Ross Geller, Matt LeBlanc, 53, who played Joey Tribbiani, and 51 year old Matthew who brought Chandler Bing to life.

One photo showed her posing with James Burrows while another was an illustration of the six sitting on the couch by the fountain, which had a quote that read: "Could this be any more of a small outdoor gathering with vaccinated friends?"

However, a fourth picture raised some eyebrows as singer Justin, 27, and his model wife Hailey, 24, could be seen sitting on a couch with David – who recently confessed he and Jennifer once had feelings for each other.

Questioning their involvement in the reunion, one person commented underneath: "I still don’t understand why Justin Bieber was there?"

Another agreed as they said: "no reason for hailey and justin bieber to be there." While a third chimed: "This post could have been more good if justin and hailey weren't there".

Some fans were quick to defend their appearance on the programme and photo though as one person hit back: "Because he adores Friends! Him and Hailey watch it every single day.

"Justin has suffered with anxiety a lot and he has said that watching Friends has helped him a lot in those moments.

"He has loved the show for years and during the first year of his career he used the name Chandler Bing when booking hotel rooms."

While a second argued: "To pull in a younger audience."