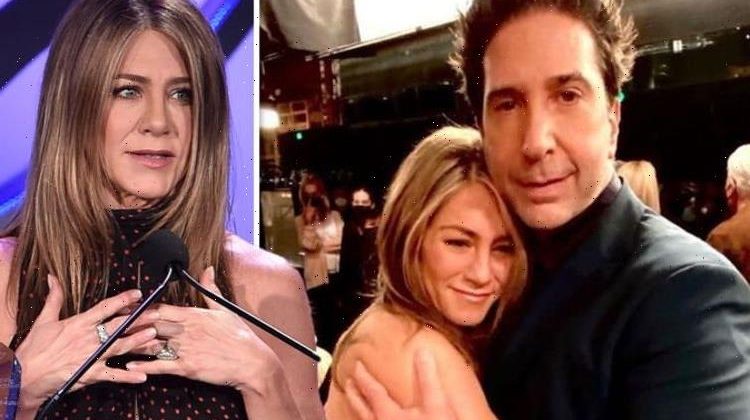 Friends stars Jennifer Aniston and David Schwimmer have reportedly been spending time together again following the 25th anniversary special of the hit show, which was released earlier this year. The duo, who played on-and-off lovers Ross Geller and Rachel Green in the sitcom, recently confessed that they previously had feelings for one another while filming the early seasons of Friends.

David has reportedly flown across the country to visit Jennifer after they both openly discussed their real-life chemistry earlier in the year.

An insider told Closer magazine: “After the reunion, it became clear that reminiscing over the past had stirred up feelings for both of them and that chemistry they’d always had to bury was still there.

“They began texting immediately after filming and, just last month, David flew from his home in New York to see Jen in LA.”

Jennifer and David played Ross and Rachel for a decade, but only recently revealed their true feelings for one another.

However, the pair admitted that the timing was never right for them to pursue a romance together, as one of them was always in a relationship.

Following the reunion, the pair, who are both currently believed to be single, were spotted cosying up together on set.

David recently sent Friends fans into a frenzy after sharing a number of behind-the-scenes snaps with Jennifer from the recent Friends reunion on Instagram.

David shared six snaps in total, but it was the last one that fans were most drawn to.

In the picture, he is seen sharing an embrace with Jennifer as she nuzzles into his neck.

David captioned it: “After a very long day, last hug of the night.”

James Corden, who hosted the Friends Reunion show, discovered the bombshell about the pair’s “crush” after he probed the cast about whether there had ever been any “off-screen romances”.

He reflected: “It’s inconceivable to me that there weren’t perhaps off-screen romances.”

David then explained: “Yeah, the first season we – I had a major crush on Jen.”

The Morning Show actress revealed: “It was reciprocated.”

David continued: “At some point, we were both crushing hard on each other, but it was like two ships passing because one of us was always in a relationship, and we never crossed that boundary.”

The pair have both been married before, with Jennifer previously tying the knot with two famous actors.

Rumour Has It actress Jennifer was most recently married to actor Justin Theroux for two years before they split in 2017, but her first marriage was to A-List Hollywood actor Brad Pitt.

David was also married to British artist Zoe Buckman for seven years, before divorcing in 2017. Together, they share a daughter, Cleo.

Express.co.uk has gone to Jennifer and David’s representatives for comment.