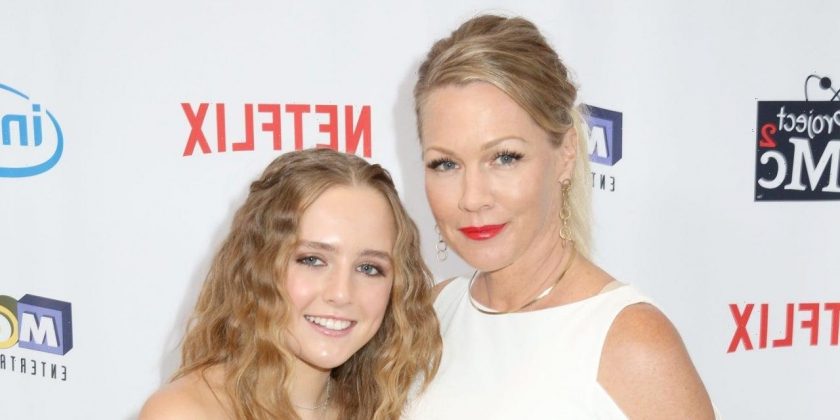 Jennie Garth got quite the positive reaction to playing seamstress for her daughter.

The former Beverly Hills, 90210 star revealed this week that she made her daughter Lola’s prom dress. She showed off her 18-year-old’s stunning black gown on her Instagram, and received a slew of praise from famous friends and followers.

“That was my first dress that I ever made,” Garth tells ET’s Kevin Frazier. “It came out so good. I was really shocked. I didn’t have a pattern or anything. I did it off of a picture she gave me.”

“I mean, what moms do for their kids. I will do anything they need or ask me to do,” she adds. “Love my kids! I don’t know what else to say.”

“The thing is, she could have asked me to buy her some fancy dress but she wanted it to be homemade. She wanted that. I dunno, it just makes me proud. And it made her so proud to be able to say ‘my Mom made my dress,'” she wrote.

Meanwhile, Garth is channeling her mom instincts into her new Lifetime movie, Left for Dead. It’s the shocking true crime story of 17-year-old Ashley Reeves, who in 2006 was brutally attacked by a former teacher and “left for dead” in the woods before being found 30 hours later.

“As a mom of three daughters, this is my worst nightmare,” Garth expresses. “It was eye-opening first of all, and second of all it was just a really emotionally challenging role because from 6 a.m. to 9 p.m. for three weeks, I was in this woman’s head and in this tragedy.”

Garth didn’t get a chance to talk to Ashley’s mom, saying, “No, we weren’t really given that opportunity for whatever reasons. The producers deemed it not a good idea.”

The story, however, made her connect and check in on her daughters more than usual.

“Every time I wake up, I feel that way. I recheck in with them. They’ve called me before helicopter mom or something. You’ve gotta do what you’ve gotta do. I’ve always been so diligent about keeping my girls safe. I drive them nuts, but I’d rather drive them nuts and them stay safe.”