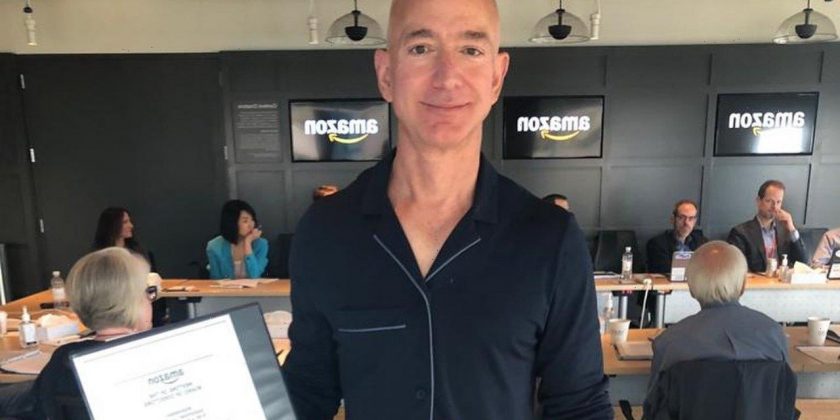 The Amazon founder has been flaunting his buff body during a vacation with his girlfriend Lauren Sanchez in St. Barts, prompting rumors that he might have taken human growth hormones.

AceShowbiz -Jeff Bezos didn’t take the easy route when it comes to his health. The billionaire’s impressive transformation is said to be the result of months of hard work and determination, despite speculation that he might have taken human growth hormones (HGH).

The 57-year-old has been flaunting his muscular figure during a vacation with his girlfriend Lauren Sanchez in St. Barts. In some pictures that made the rounds on the Internet, he went shirtless and wore only a pair of red-and-white swimming trunks while on a boat, showing off his buff physique.

This prompted folks on the internet to speculate that Jeff’s got the super-jacked body with the help of HGH. However, this has been debunked by a source with direct knowledge who tells TMZ that the allegation is 100% false.

The source tells the site the Amazon founder has been following a strict diet and exercise regimen for months, insisting that no drugs or other artificial enhancements were used for his physical transformation.

Page Six additionally reports that Jeff has been hiring personal trainer Wesley Okerson, whose clients include high-profile figures such as Tom Cruise, his ex-wife Katie Holmes, Gerard Butler, Sacha Baron Cohen and his wife Isla Fisher. “Wes is amazing, he’s one of the hardest working guys. If you train with him, you will look legit,” a source tells the site of Wesley’s work.

The trainer was seen among the peers who joined Jeff and his girlfriend during the trip to the Caribbean. Lauren herself has praised Wes for his role in her boyfriend’s fitness journey. When posting on Instagram last month a photo of her and Jeff paddling a canoe together, she credited the trainer as writing, “Good Job Wes!”

Meanwhile, Wesley has got his own spotlight, having been featured on Netflix’s reality competition show “Strong“, which put teams of women through fitness challenges.