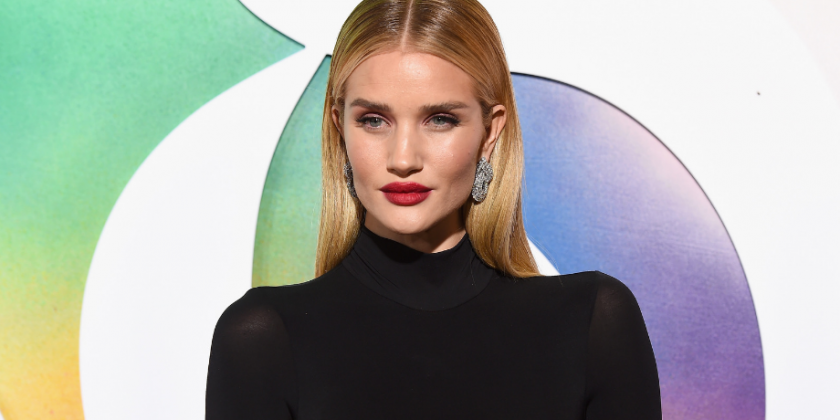 Rosie Huntington-Whiteley shared an incredible shot taken by photographer Russell James for his newest edition of his Angels book. In the Instagram photo, she stood topless on top of a white building, with views of the L.A. skyline in the backdrop. Rosie hugged herself to censor her curves, as she also wore a high-waisted black skirt with thigh-high tights. Fans exclaimed, “Wow so magical missing those LA vibes!” and “Stunning shot.”

Huntington-Whiteley’s two other recent posts are also sneak peeks of the Angels book. One photo is a black-and-white portrait of her as she looked to her left, as she wore a heavy double cat-eye makeup and very glossy lipstick. Rosie shared a second photo of herself wearing the same makeup, except this time in color. She appeared to be playing with her tongue, as the picture revealed the lipstick was a deep magenta color with a heavy layer of gloss on top.

And while it’s already full-on winter in most of the country, the model’s been showing herself enjoying some California sun in other recent selfies. In one video, she wore her hair down as the wind blew in her face. She panned the shot to show that she was hanging out by the ocean, wearing a fuzzy purple-and-tan hoodie with a white graphic t-shirt.

Another selfie showed Rosie posing in either a low-cut fuzzy white shirt or a robe of some sort. The captions noted that she was enjoying the sun in California. And it’s no wonder, with the weather in L.A. hovering around the low-70s and high-60s for much of this week.

Plus, the model has a lot to smile about, considering that the Daily Mail reported that she and fiancé Jason Statham are going to get married on New Year’s Eve.

She previously opened up to Girl Boss about how she sets goals.

But that doesn’t mean that Rosie sets a strict set of goals to reach. Instead, she expressed the importance of flexibility.

“You have to be flexible. You have to always have a really clear idea where you want to go, but you also have to be ready to move with the curve balls that get thrown at you in business—and life in general.”

Honoured to have been photographed by the legendary @russelljames for his new book “Angels” and to be featured alongside such incredible and stunning women. To see more and pre order an all new collectors only limited edition book go to his site -angelsbyrusselljames.com