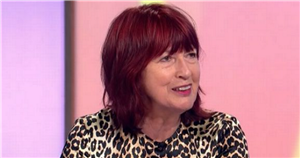 Janet Street-Porter has joked that helping Amanda Holden get out of her jumpsuit to use the toilet at David Walliams' party is her "claim to fame".

Speaking on Tuesday's instalment of Loose Women, Janet detailed her "glamorous" time at comic David's star-studded 50th birthday bash when she mentioned her run-in with Amanda in the bathroom.

"The highlight of my evening took place in the ladies loo, where Amanda Holden asked me to help her take her dress off," she explained. "Well, she had a jumpsuit."

Janet added: "I don't wear jumpsuits, they're a bit tricky" before giving insight into why she helped the Britain's Got Talent star get undressed.

"I had to help Amanda unhook the top part to slide it down to have a wee! So, that's my claim to fame this week," she said.

Amanda documented her look for the evening, revealing on Instagram that she donned a figure-hugging nude jumpsuit the plunged down the middle.

"All dressed up for someone's big birthday bash," she wrote in the caption.

Meanwhile, speaking further about the event in question, Janet continued: "It was a fantastic party, and a big thank you to David for inviting me."

Janet said that she was dressed up for the occasion in a "floor-length sequin dress" but forgot to take a selfie to show her social media fanbase.

"I managed not to fall over it when I got out of the car. It was a bit of a different story when I left at 1 o'clock in the morning," she added.

Janet also mentioned that David entered the Claridges ballroom on a white horse.

"The theme was Studio 54, so he was doing a Bianca Jagger, but he had a white suit on," she said.