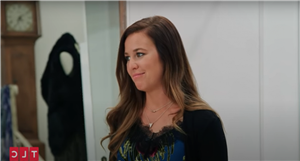 Jana Duggar has a new look. The former Counting On star took to social media on August 25 to show off her new haircut. The fresh style earned plenty of compliments from her family, friends, and followers.

In the video she shared to Instagram, Jana heads to the salon for a cut and color. “Something new happened!” she captioned the post. By the time she left, the 31-year-old had traded her brunette locks for a blonde balayage.

The makeover earned Jana compliments from her younger sister, Joy-Anna Duggar, who wrote: “I love it!! You’re beautiful, Jana!”

Duggar family friend Carlin Bates, of Bringing Up Bates, also loved the new look. “Ahhhh… it looks so good! I love it, Jana!” she wrote. Jana’s sister-in-law Claire Spivey, who is married to Justin Duggar, also chimed with some words of praise.

Many of Jana’s followers also commented on the post, sharing how much they loved her new hairstyle.

Is the ‘Counting On’ star’s makeover happening ahead of a wedding?

Jana’s refreshed look comes amid speculation that she might soon become the third member of her family to walk down the aisle in 2021. (Justin and Jed Duggar both married earlier this year.)

So far, the Duggars haven’t officially announced that Jana is courting or engaged. But rumors have been swirling for months that she might be involved with a Nebraska man named Stephen Wissman. Followers of the family point to a series of social media posts and photos as evidence that Jana and Stephen are planning to tie the knot in the near future.

However, a member of Wissman’s family recently took to social media to deny that a wedding was imminent.

Many ‘Counting On’ fans are eager to Jana Duggar get married

If a wedding for Jana is in the works, it would be big news for followers of the Duggars. Jana is the oldest unmarried Duggar child, and people have been hoping for years to see her get married and move out of her parents’ home.

In the past, members of the Duggar family have publicly announced when they enter a courtship. That’s usually quickly followed by news of an engagement, and soon after, a wedding, which was then broadcast on their TLC reality show, Counting On. But in the past year, they haven’t strictly followed that pattern. Jed Duggar, for example, kept his courtship and engagement to Katey Nakatsu under wraps, only going public with the relationship when they got married in April 2021.

It’s possible that Jana might be following a similar pattern to Jed and holding off on an official relationship announcement until a wedding happens. At the moment, the family is keeping a relatively low profile on social media following Josh Duggar’s arrest in late April on charges that he had downloaded child sexual abuse material, which led to Counting On’s cancellation.