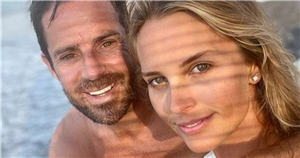 Join the Club! Get all the gossip on fashion and beauty and never miss out on top stories again

Jamie Redknapp 's pregnant girlfriend Frida Andersson-Lourie showed off her blossoming bump as they enjoyed an idyllic getaway to Santorini.

The former footballer took to his Instagram account on Wednesday morning to share loved-up snaps with the stunning blonde model as they soaked up the sunshine.

The pair, who are expecting their first child together later this year, looked undeniably smitten as they posed for pictures at the beach, next to an infinity pool and in front of a sunset.

Looking absolutely radiant, 37 year old Frida wowed as she showed off her evolving figure in a white frilled bikini as she cosied up to Jamie.

The couple has been together for 18 months after being introduced through mutual friends.

The couple started dating in 2020 during lockdown and the relationship is Jamie's first public one since his split in 2018 from wife of 19 years Louise.

This one on one time appears to have worked well for the couple who have been described as inseparable and as their relationship has gone from strength to strength.

Jamie publicly split from ex-wife Louise following her appearance on BBC's Strictly Come Dancing after which the singer found a new lease of confidence and wanted to pursue a career on stage. Louise had previously put her career to one side as she devoted her time to raising her family.

Jamie and Louise were said to have split amicably and have co-parented their two boys since. Jamie was not linked to anyone else until he met Frida 18 months ago.

Frida, originally from Sweden, has been working as a model in the UK and is signed to modelling agency Next Management as well as MIKAS in Stockholm and was previously signed to Mrs Robinson Management.