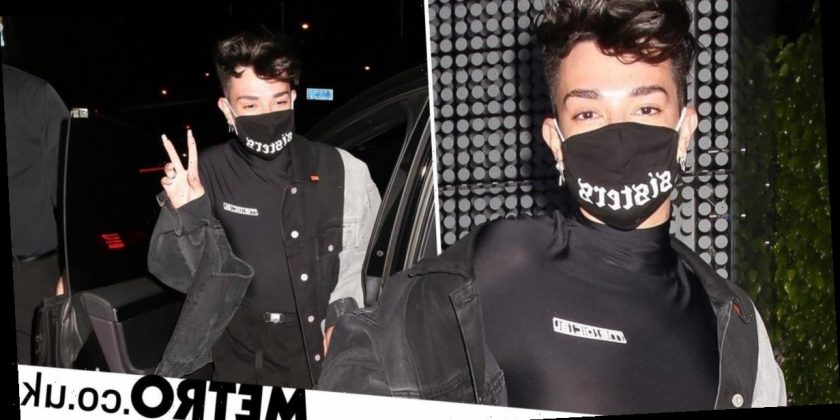 James Charles has been snapped looking like he doesn’t have a care in the world following the drama with Tati Westbrook, Shane Dawson, and Jeffree Star

The YouTube star masked up (with a Sisters brand face mask, of course) as he headed to dinner at Boa in West Hollywood.

Donning an all-black outfit, he looked to be feeling himself as he hopped out of a car and flashed a peace sign to the cameras.

James, 21, has made it clear he’s not going to address the drama, although he weighed in on cancel culture when he was approached out and about in LA.

Asked why there’s always drama in the beauty community, the YouTuber said: ‘Who knows? I’m just staying out of it, minding my own business, just moved into a beautiful new house, I have great friends around me.’

On the topic of Shane, James added: ‘I don’t wanna talk about anything in relation to him,’ and admitted he hasn’t spoken to him.

However, he also weighed in on whether YouTubers who used ‘dark humour’ in the past should be ‘forgiven’, explaining: ‘I think it should always be looked at on a case by case basis and make sure people are changing actively.

‘That’s kind of what I’ve always believed in.’

The internet was left in shock when Tati, 38, uploaded a lengthy video apologising for making her exposé Bye Sister on James last year.

She accused Shane, 31, and Jeffree, 34, of ‘gaslighting’ her into making it and claimed they were ‘bitterly jealous’ of the young beauty guru.

Denying the claims in a furious Instagram Live rant after Tati’s video, Shane said: ‘I am losing my mind, this is so f**cked. I can’t process this, this is insane.

‘That’s kind of what I’ve always believed in.’

Jeffree hasn’t addressed the claims and has stayed off social media, other than being spotted lounging in his pool in his LA mansion on fellow YouTuber Cole Carrigan’s social media.