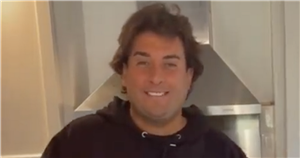 James Argent has been seen for the first time since undergoing a gastric operation in a bid to lose weight after going up to 27 stone.

The former TOWIE star had half his stomach removed in early April during a gruelling sleeve gastrectomy operation at a top clinic in Birmingham.

Now, taking to his Instagram stories, the 33 year old has returned to give his 783,000 followers an update on his condition as he said: "It's a new year, it's a new me and I want to try some really healthy recipes instead of snacking on all those bad things for me."

Wearing all black, he went on to advertise a food blender that has been helping him get all his nutrients in as he told The Sun Online that he cannot eat solid food for six weeks following the operation.

During the candid chat, Arg explained that he sees blood come up in his sick occasionally, which is "quite scary". But the star has already seen the benefits of the surgery as he said: "I’ve already got a bit of a glow back in my face so I’m happy with that.

"And I feel like I’m already losing weight, which is good."

Throughout this time, he's had many incredible celebrity friends to lean on, including his best pal Mark Wright and ex girlfriend Lydia Bright.

James and Lydia, 30, began dating long before The Only Way Is Essex when they were just teenagers.

After several splits while on telly due to cheating rumours, they finally called it quits on their eight-year romance in 2016.

James went on to date Gemma Collins before their relationship's tumultuous end last year while Lydia welcomed her baby daughter Loretta Rose in March 2020 with her ex.

Since then, it appears the pair have rekindled their friendship and have become quite close as James told the publication: "Me and Lydia are extremely close again – we have kept that low-key and behind closed doors."

He continued: “Obviously she’s had a beautiful baby and she’s a single mother now.

"We were together years before TOWIE existed or before either of us were in the public eye.

“She’s a real friend and she and her mum have been an incredible support to me."

James added: “I’m very fond of Lydia. I’m lucky to have her in my life and for us to be such close friends."