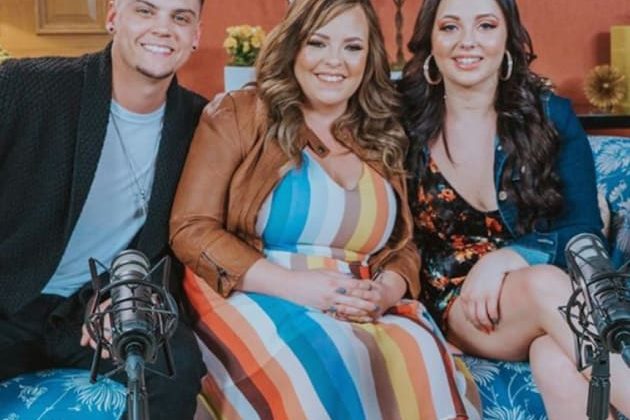 Jenelle Evans is out.

And Jade Cline is in.

MTV has formally announced Cline as a new cast member on Teen Mom 2, doing so by having her sit and chat with a number of veteran network stars.

How did she find out about this role? What sort of drama will she be stirring up?

The new addition sat with veterans Catelynn, Tyler and Kailyn to discuss these questions and many more on the Teen Mom 2 reunion special that aired on June 3.

During a unique segment, she actually chatted with these stars as part of Kailyn’s Coffee Convos podcast, a portion of which was recorded by MTV and we’ve featured here.

During the interview, Cline said she was kept in the dark for awhile in regard to her status on Teen Mom 2…

… until her old producer from Young and Pregnant dropped the awesome bombshell right in her lap.

“They said, ‘We love you, we love your story so much, we want you to be on ‘Teen Mom 2’ and I was like, I didn’t know what to say. I was like, ‘I feel so wanted and popular!’” Jade explained, adding:

“The show has been on so long that I can’t believe they would want me on a show that’s been on for like 10 years with the same people.”

One of those people, of course, is now a goner.

Evans is off fighting for custody of her kids, not talking about storylines for next season.

Cline, meanwhile, ought to bring a whole lot to the table:

Her father committed suicide when she was very young. Her mom has been arrested for drug use and possession.

Cline was removed by Child Protection Services as a teenager and has been living on her own since the age of 16.

“I’ve been out of my parents’ house since I was 16 years old,” she says in this footage.

“I’ve been on my own for six or seven years, so I feel like I didn’t vibe with anyone or talk with [the Young and Pregnant cast members] as much just because I was just somewhere else mentally.”

As we said, Jade’s biological father is dead — and her stepfather is basically dead to her.

“Both of my parents were just incarcerated this last week,” she shared with Kailyn and her co-host Lindsie Chrisley. “They’ve been strung out for so long. They’re like binge addicts.”

You can read more about Cline’s many secrets and struggles here:

And you can watch her discuss all things Teen Mom 2 related, included her upcoming role on the series, in this video.