News on the street is that Bennifer is back on. Ever since Jennifer Lopez split from ex-fiancé Alex Rodriguez, she’s been hanging out with her other ex-fiancé, Ben Affleck. Apparently hanging out is turning into hooking up (or possibly something more?), according to Us Weekly sources.

“Jen really enjoyed her trip to Montana and is really loving Ben’s friendship,” a source tells Us Weekly. “[She] has feelings for Ben. They are taking it slowly, but things are moving in a romantic direction. She is focused on her kids and she’s working in Miami.” 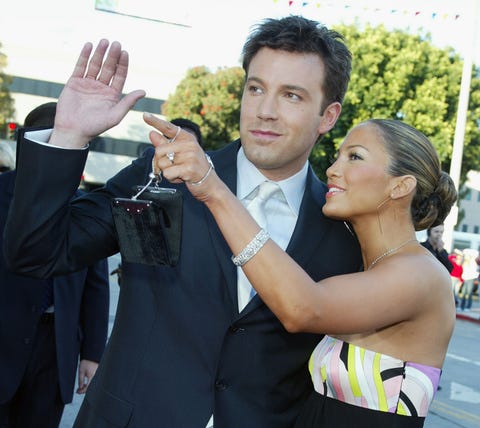 Jen and Ben met more than a decade ago on the set of their comedy, Gigli. They started dating and eventually got engaged. Sadly, they split in 2004. But, they’ve stayed in touch (obvs) and there’s clearly still a lot of love there. I mean, you don’t just take a trip to Montana with anyone, right?

According to a People source, “[Jennifer] is open to having a relationship…she wants to spend as much time with Ben as possible to see where this could go.” A separate People source told the outlet that their reunion seems to have come at the right time as “Ben and Jennifer were in the same mindset after their breakups.” The second source added, “whether they end up together or not it’s good for both of them now. And not that surprising.”

A month ago, I would’ve been surprised at the thought of Jennifer and Ben reuniting. But, now? Anything’s possible, folks! If Bennifer can give it another shot, then who’s next? Brad and Jen, I’m looking at you…

You love all the deets J.Lo and Ben celebs. So do we! Let’s overanalyze them together.