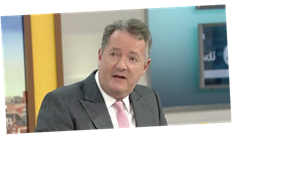 ITV bosses have confirmed they have spoken to Piers Morgan over his scathing coverage of Meghan Markle following her and husband Prince Harry’s Oprah Winfrey interview.

Piers, 55, stormed off the Good Morning Britain set on Tuesday morning after his rants about Meghan, 39, were branded “diabolical” by Alex Beresford.

Meanwhile, the outspoken TV presenter was slammed for his numerous rants both on and off GMB about Meghan and 36 year old Harry’s since the release of their interview – including claims he didn't believe Meghan when she said she felt suicidal.

Now, ITV Chief Executive Carolyn McCall told reporters that Director of Television Kevin Lygo has had words with Piers behind the scenes.

Carolyn said: “I haven’t spoken to Piers myself, but I know Kevin Lygo is speaking to him on a regular basis and has done so the last couple of days.”

Meanwhile, Carolyn insisted GMB is a “balanced show” and added: “ITV has many voices and we try and represent many voices every day. It’s not about one opinion.”

The ITV boss also threw her support behind Meghan after she said she had struggled with her mental health during her time in the Royal Family.

But, when asked if Piers will lose his job at the result of his comments, the ITV boss declined to comment and said she would not be drawn further on the issue.

It comes after mental health charity Mind shared their disappointment after Piers said he “didn’t believe” she had struggled with thoughts of suicide.

The charity released a statement on Monday 8 March, which read: “We were disappointed and concerned to see Piers Morgan’s comments on not believing Meghan’s experiences about suicidal thoughts today.

“It’s vital that when people reach out for support or share their experiences of ill mental health that they are treated with dignity, respect and empathy. We are in conversations with ITV about this at the moment.”

Piers later addressed his comments on GMB on Tuesday 9 March as he said: “We talked about this yesterday, I said I don’t believe as an all encompassing thing that I don’t believe what Meghan Markle said, generally, in this interview.

“And I still have many concerns about what she said. But, let me just state for the record my position on mental illness and on suicide. These are clearly very serious things, they should be taken extremely seriously.

“If someone was feeling that way, they should get the help and treatment they need every time. And if they belong to institutions like the Royal Family and they and seek that help they should be given it.

“And if it turns out Meghan Markle… and it’s not for me to question, whether she felt suicidal – I wasn’t in her mind and that’s for her to say. My real concern was a disbelief, frankly – and I’m prepared to be proven wrong for this and if I’m wrong then this is a scandal. That she went to a senior member of the royal household, told them she was suicidal and was told she couldn’t have any help because it would be a bad look for the family.

“If that is true, this person if they’re still there should be fired and the Royal Family have serious questions to be answered about how they handled this.”

If you have been affected by this story, you can call the Samaritans on 116 123 or visit www.samaritans.org.