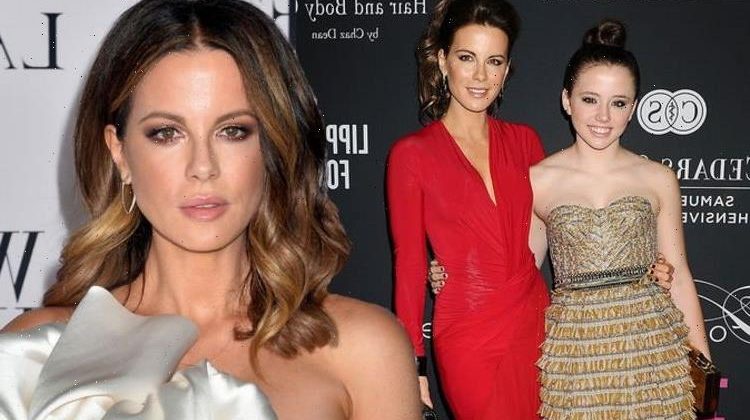 Kate Beckinsale, 47, admitted she hasn’t seen her daughter Lily Sheen, 22, for two years, as she claimed that the Covid-19 pandemic has kept them apart. The actress shares her only child with actor Martin Sheen, declared it was “ridiculous” that they haven’t seen each other for some time

She also confessed they are both panicking about looking “really old” when they reunite.

Appearing on Live With Kelly And Ryan on Friday, Kate said: “I haven’t seen my daughter for two years because of everything.

“Also, I went to Canada working and she couldn’t come see me.

“Two years of not seeing your child is, to me, the most preposterous thought, it is ridiculous.”

Her ex Michael, 52, is based in Port Talbot in his native country of Wales, with his partner Anna Lundberg, 26, and their daughter Lyra, 22 months.

Speaking about the upcoming reunion with her daughter, Kate added: “Thank goodness for FaceTime and all that, but we’re both panicking that we’ll look really old to each other.

“My daughter is 22 but looks eight! So she’s like, ‘I’m just worried that you’re going to think I look old’  but I’m going to look old.

Kate confirmed her daughter is pursuing an acting career and stars in the forthcoming action-comedy, The Unbearable Weight Of Massive Talent, alongside Nicholas Cage.

Kate is believed to be currently single and has spent the pandemic alone after splitting from musician Goody Grace, 24, in 2020 after months of dating.

In an interview with Extra recently, she commented on her love life: “Do you know, I’ve really barely ever been on a date.”

The Underworld star quipped: “Like I literally kind of meet someone, get to know them at work and then either marry them or get pregnant by them, on the whole.”

She confirmed she has certainly never been on a blind date with a  stranger before, saying: “I just can’t think of anything I’d hate more than sitting in front of somebody I don’t know, that chances are I won’t like, and then have to sit and watch them eat food.”

Kate began dating Michael in 1995 before they separated in 2003. The Prodigal Son actor also appeared as Kate’s co-star in multiple Underworld films including the original feature which came out in 2003.

From 2004 until 2016 Kate was married to Len Wiseman, who directed the first two Underworld films and has been a producer throughout the franchise.

Back in 2019, the actress struck up a brief relationship with comedian Pete Davidson, 27.

Pete had nothing but lovely words to say about Underworld star Kate after their split.

The comedian dubbed the 47-year-old “one of the funniest people I’ve ever met”.

He added: “F**king legendary, all of my uncles freaked out.