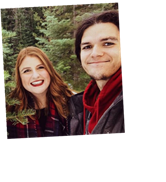 Isabel Roloff is having a really tough time right now.

But that doesn’t make the pain any less acute, you know?

The occasional reality star — who is married to former Little People, Big World cast member Jacob Roloff — said a few days ago that she needed a social media break.

And now Isabel is gettiing brutally honest about her mental health.

In a new and troubling video posted to Instagram, Isabel sits quietly, with her hair down and and a sullen look on her face throughout.

The song “Godspeed” by James Blake can also be heard playing in the background, while words of encouragement scroll across the bottom of the screen to remind Roloff and others of how much they matter.

In the footage, Isabel tells herself that the “lies” are that she’s “unworthy, unlovable, [and] broken.”

She thhen gives herself a pep talk.

“The truth: I am abundant, I am worthy, I am healing,” says Roloff.

Isabel, to her credit, is aiming to be inspirational with the way the video is set up, as her frown turns to a smile eventually and she brings one hand to rest on her chest as she takes in a deep, calming breath.

“Stop believing the lies. Repeat after me: I am abundant. I am worthy. I am healing,” she says.

In the comments section of this post, a number of followers let Isabel know the sort of reminder is always helpful. Always useful. Always motivating.

“I so needed to hear this today,” one person wrote. “Thank you!”

In November 2020, the always-raw and honest Isabel admitted to her followers that she “starved herself” as a teenager, and was “wasting away” in an eating disorder battle.

Just like now, she wrote this message to help anyone else in a similar situation.

“You don’t need to be the same weight you were when you were fourteen,” she said back then, adding:

“It’s nothing to strive for now that I am older, happier and healthier. This is recovery from an eating disorder.”

Around the same time a few months ago, Isabel revealed she’s suffering from seasonal depression.

“Just went outside and it’s so dark already I wanted to cry. But instead, I took some deep breaths,” wrote Isabel, using her platform to vent, heal and motivate.

We continue to applaud Roloff for doing so.

And we really hope she keeps hanging in there.

These are challenging times for nearly everyone, so it helps to hear we aren’t alone.

Thank you for passing along that message, Isabel.