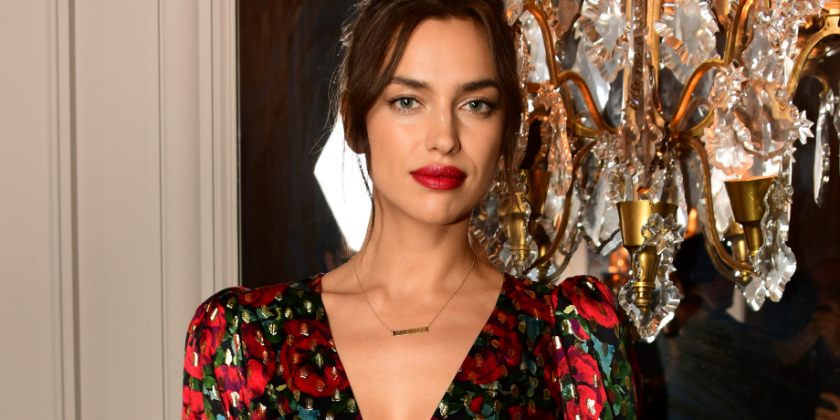 Model Irina Shayk promoted underwear by Intimissimi Uomo in her newest Instagram post, as she lounged in a pair of their underwear at what looks like the airport. Irina sat at the edge of a black sofa, as she held up a white cup and smiled for the camera. She wore her hair down with a heavy left part, and sported a white T-shirt that she tied to make it a crop top. Fans noted, “Always young and beautiful,” “Are you at an airport in your underwear?,” and “You are simply the B.E.S.T!!!”

Shayk recently also shared sneak peeks of the new edition of Vogue Mexico, where she was featured on the cover wearing a nude-toned bodysuit. More photos showed Irina in two outfits. One image was of the model wearing a sheer, purple shirt as she crossed her arms. Her makeup complemented her outfit, including a pink-purple lipstick and pink eyeshadow. A second photo showed Irina posing in an all-black dress, which somewhat resembled a robe. She tucked her right hand into the dress, while she grabbed her right arm with her left. Shayk’s hair was pulled back into a low hairstyle with an off-center part, as her left leg peeked through.

The model previously discussed her work with Intimissimi with Fashion Unfiltered, and what makes the brand different from the others.

“I feel like that’s really unique because we’re celebrating and empowering women to love themselves from the inside out. We’re telling every girl out there that they’re beautiful. It doesn’t matter what job you do or what size dress you’re wearing.”

And surprisingly, Irina talked about how she actually never bought bras growing up. Considering how she represents many brands, sometimes modeling lingerie, this might come as a surprise to her fans.

“Believe it or not, I got my first bra from my very first job. I didn’t really ever go ‘bra shopping’ because I’m from a very small village and we didn’t have money to shop for that stuff. I don’t even think we had a lingerie shop there. When I started working with Intimissimi at 19 years old, I was in Moscow modeling at this big shopping mall and they were discovering new faces and that’s actually how I got my first bra. That’s how things work when you live in a village!”

Considering the model has a longstanding relationship with the brand, it’s no wonder that she’s still working to promote their line. It’ll be interesting to see what else she has in store with Intimissimi in the upcoming year.