Alec Baldwin’s daughter showed a true sense of body positivity in a series of beautiful Instagram photos, showing off an Autumn-appropriate bikini!

Fall is finally here! Ireland Baldwin didn’t shy away from her natural beauty in a series of stunning Instagram photos, where the 25-year-old actress modeled a brown bikini for autumn on Wednesday September 22. The beauty showed off her many tattoos and “embraced” all the “things that make me human” in the seasonal photos.

Ireland posted a bunch of the gorgeous pictures. Besides the brown bikini, she really leaned into the fall theme, with a few of the photos being taken outside, and changing leaves being visible. Many of them featured her posing for the camera, but some were close-ups of her torso, thighs, and other body parts to emphasize all the things that she wanted to highlight and show love to in the body positive post. “Embracing my cellulite, stretch marks, curves, eczema, ingrowns, pale skin, grown out roots, hairy legs, and all the other fun things that make me human,” she wrote in the caption, along with a star and two heart emojis.

The Grudge Match actress shared one of the photos a day earlier on Tuesday to announce her excitement for fall. It looked like she had just thrown a bunch of colored leaves into the air, and had her hands thrown up with joy. “Fall colorzzzzz comin’ in hot,” she captioned the photo. 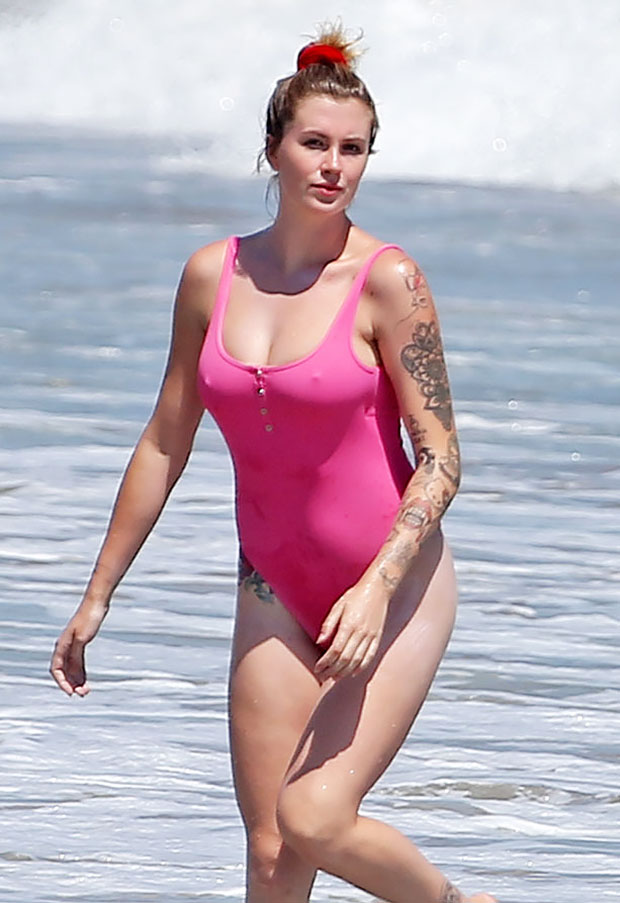 Ireland, whose parents are Alec Baldwin and model Kim Basinger, has never been shy about embracing natural looks and showing off things like her tattoos. Back in April, she revealed that she’d gotten a cool cowboy boot tattoo on her butt, with the word “Yeehaw” inked right above it. She also posted a series of since-deleted nude photos of herself back in January, where she posed in nothing but a set of cowboy boots.

Besides body positivity, Ireland is always ready to standup against others when she feels like she has to. When Selena Gomez fans attacked her cousin Hailey Baldwin due to her marriage to Justin Bieber in September, Ireland commented on a TikTok page to call the fans making fun of Hailey “disgusting,” before talking about how great her cousin’s relationship with Justin is. “They’re one of the happiest and most in love couples I’ve ever gotten the chance to be around. They don’t care about them,” she wrote.