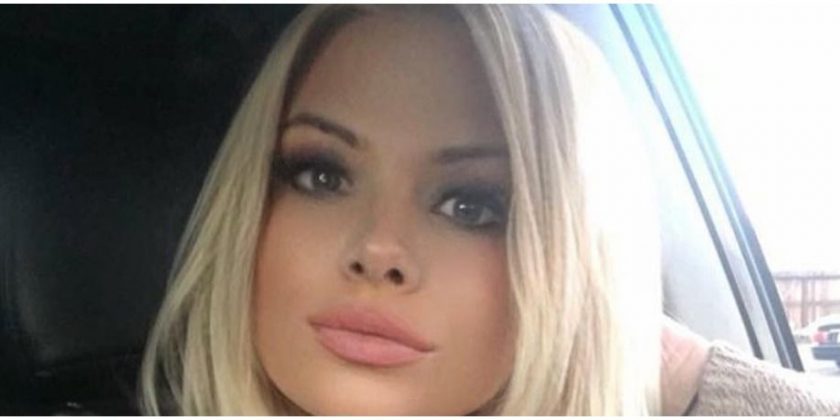 Instagram model Kourtney Reppert is showing off her September look for her new calendar, and the photo is very revealing.

On Friday, December 14, Kourtney Reppert took to her Instagram account to share an inside look at her brand new 2019 calendar, and her fans loved it. In the photo, which she reveals is the snapshot for September, the model is completely topless while sitting on the beach.

Reppert dons a black-and-white striped one-piece bathing suit in the sexy snapshot but has the top pulled down to expose her bare chest. Kourtney’s hands then go up to cover her breasts, as her long, blonde hair is parted down the middle and falls in loose waves down her back and shoulders. The model is seen sitting on a sandy beach while a teepee made of logs rests behind her.

“If you need me, I’ll be in my teepee,” Kourtney says in the caption, also urging fans to buy her new 12-month calendar before it’s gone.

In the photo, Kourtney tags her plastic surgeon, Blackhawk Plastic Surgery, and her photographer, Isaiah Mays, who seemingly took the racy photograph of the model for her new project.

Reppert has been sharing photos to promote her “Bare in Nature” calendar all week, and her fans have taken to the comment section to reveal how beautiful they believe she looks in the risque photographs.

As previously reported by the Inquisitr, Kourtney Reppert first garnered fame when she was named Philadelphia’s Hottest Sports Babe by WMMR radio station. She also earned the title “Flyers’ Hottest Fan,” and “Phillies Hottest Blonde” before moving to L.A. to expand her career in Hollywood.

However, Reppert experienced some serious personal drama not long after the move when a man named Luis Plascencia began stalking the model. He was later investigated by authorities, arrested, and sentenced to time in prison for his threats against Kourtney and her family members.

However, Kourtney is past that dark time in her life and is opening up about the future, including what kind of man could catch her eye under the right circumstances.

“I’m kind of a big nerd, and I tend to find athletic nerds attractive the most. Being nice is always a bonus. Someone who has a positive attitude is very attractive,” Kourtney told Maxim of a possible partner.

She also opened up about her fantasy, saying it’s all about the money.

“Just having a man hand me over his wallet and tell me to get anything my pretty heart desires. A girl can dream, right?” Reppert confessed.