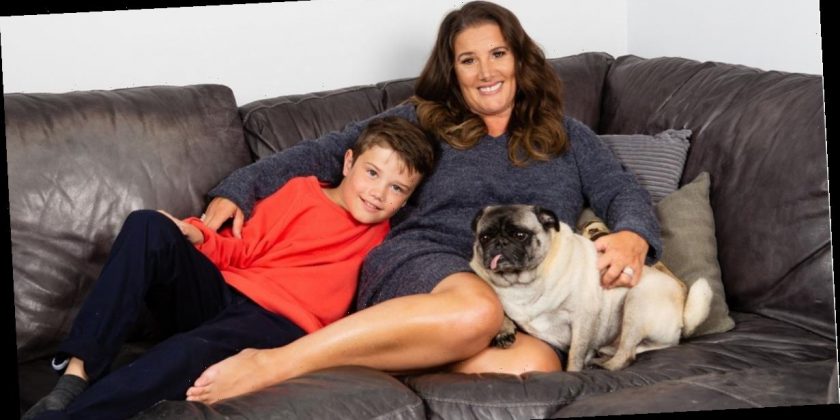 For years, Sam Bailey had a feeling that her son Tommy was different to other kids, but this summer she finally learnt why – he has autism.

Opening up about her boy’s condition for the first time to OK!, the 2013 X Factor winner – who is also mum to Brooke, 15, and Miley, six – says getting the diagnosis was actually a relief.

“It’s really taken a massive weight off our shoulders as parents,” admits the 43-year-old, who is married to Craig, 47. “Now we know what his condition is, we can do more to help him. Tommy has also relaxed because now we have an understanding of who he is,” she adds.

As well as being on the autistic spectrum, Tommy, 11, has also been diagnosed with dyspraxia – a brain disorder which affects coordination.

“Tommy would fake illness to get out of sports at school,” Sam reveals of her son’s difficulties before his diagnosis. “We’ve also tried to get him to ride a bike, but when he has to steer he falls off.”

Ex-prison officer Sam raised money via a series of live social media gigs to help pay for Tommy to be assessed privately at Spire Hospital in Leicester, where the family live. “The waiting list for an NHS assessment, especially with coronavirus, is anything from one to two years,” she explains of her decision. “I haven’t got that time because he starts secondary school this month and that’s such an important time for him.”

Now armed with the facts, Sam shares her emotional journey towards getting answers, her guilt over missing the signs and her hopes for the future…

What made you suspect Tommy might have autism, Sam?

I just knew that my boy wasn’t like every other child. Every child with autism is unique, and they have different traits. I just knew and have known for over the last three years that there is a significant difference in my child.

What were the signs in Tommy?

He has had a few behavioural problems that have come to light in the last few years, as well as self-esteem issues and being withdrawn. He has a real naivety and innocence to him, so he doesn’t always know how to socially interact. He kept coming home from school saying he was being bullied, too.

That’s awful. How did you deal with that?

I went to see the school but when we got to the bottom of it, it turned out it was normal school banter but he was extremely sensitive to it. If anyone makes a joke at his expense, it’s like the world has ended and then he’d get really angry and struggle to calm down.

Has he ever lashed out or been violent towards you?

Never and he never would be. He has never hurt anyone, he just gets really upset, but I’m always the one who can calm him down. I remember a few years ago we were in Florida on holiday and he had the biggest meltdown, which stemmed from another kid teasing him about having a girlfriend. He was screaming and breathing heavily with his eyes all wide. It’s like if someone says something he doesn’t like, his whole mind goes into overdrive and he will get more and more wound up.

Does he have sensory issues, too?

Yes. He hates getting his hair cut and what I’ve learnt since is that the hair follicles on the head are the most sensitive part of the body for some kids with autism. He also hates the noise from hand-dryers in toilets, and sometimes when we play music in the car he says it hurts him because it’s sensory overload. He also has problems with the consistency of certain foods, which is all to do with textures. He will eat chips for example, but not mash, and it’s really hard to get him to eat with a knife and fork, so he eats with his hands.

Some children with autism struggle to show emotion. Does Tommy?

No, he is actually very emotional. If I looked him in the eye and told him how much I loved him, he would just cry like a tap. He tells me he loves me all day every day. He is the cuddliest boy and he loves his mum.

No, he was like, “Oh he is alright, don’t worry about him.” But I just couldn’t shake the feeling. It was often little things, like we have tried so many times to get him on a bike and he pedals in a straight line but as soon as we ask him to steer, he falls off and then has a massive meltdown. That’s a form of dyspraxia, which he has also been diagnosed with.

Was it difficult to get a diagnosis?

I paid for Tommy to have his assessment privately in the end. It’s expensive but the waiting list to get assessed through the NHS, especially with coronavirus, would have been anything from one to two years. I haven’t got that time because he starts secondary school this month and that’s such an important time for him. I wanted to get everything in place in case he needed extra support.

What did the assessment involve?

We went to see an amazing guy called Dr Thorley, and he is incredible. We saw him for the first time in May and Tommy went five times in total for all these different tests. After that, I received a 40-page report which confirmed that he has level two autism and also dyspraxia. There is also the chance he might have dyscalculia too, which is like dyslexia but with numbers instead of letters, but we haven’t had that diagnosed yet.

How did you feel when you first read the report and saw the diagnosis?

I picked the report up from my PO box and sat in the car reading it. Of course I had a moment where I was upset about it because I thought, “It’s a long old road now and he is going to come across struggles in his life.” I also feel incredibly guilty that I didn’t do something sooner for him, but I just didn’t see the signs for a long time. Until the last few years, I just thought certain things he did were just him and his personality.

What was the first thing you did after reading the report?

I rang my husband and said, “I’m not coming home, I’m going straight to his secondary school.” It was the last week of term before the summer holiday so I wanted to see the headmaster before that to get everything in place for September. They have been great, they have put him on the Special Educational Needs register and he has an EHCP [Educational Health Care Plan] in place too, which helps get him the extra support he needs.

How has Craig taken the diagnosis?

He is a lot more patient with Tommy now. It has given him a better understanding of Tommy and it’s probably brought us closer in our marriage.

And how has it affected Tommy’s relationship with his siblings?

Brooke has really cut him some slack. For her it’s been a bit of a revelation – I haven’t seen them argue or anything since Tommy’s diagnosis. Miley is five and she just gets on everybody’s nerves but even yesterday, the pair of them were playing and Tommy was trying to teach her to do stuff.

How are you feeling now the news has sunk in?

I’m fully embracing it. Two days after I found out about my son’s diagnosis, I went and got a T-shirt that says, “I love somebody with autism.” I don’t want Tommy to ever be ashamed of his autism. It doesn’t define him, but he is stuck with it. It’s something he has to deal with but it’s something that, with help, will get easier.

Does Tommy understand his condition?

He has done a little bit of research and he recognises the symptoms when he reads about them online. He is like, “I’m like that, I do that!” It’s like a light bulb has gone on, but the road ahead might be bumpy as kids can be cruel.

Do you think he will ever be able to live an independent life?

I don’t know at this stage, it depends how much growing up he does and what his mindset is. He doesn’t think about the consequences of certain situations at the moment. There is such an innocence to him and he doesn’t see danger. If a stranger approached him and said his mum had sent them to pick him up, he would just get in the car. It scares the c**p out of me.

What are your hopes for his future?

Tommy is really into computers and technology, and he wants to be an animator when he’s older, so I’m obviously supporting him in that ambition and trying to feed his passions. He has his own merchandise range, Tommy Pug Boy, which we helped him set up and sell online. He’s obsessed with pugs and it started off with a logo he designed and we’ve put it on T-shirts, mugs and keyrings… you name it.

What about your own career – might we get a new album soon?

My last album came out in 2017 but I was due to go to Nashville in April to record new music. That got cancelled because of the pandemic. I was also due to make my West End debut soon; I was due to start rehearsals last month. Everyone is in the same boat. With everything in life at the moment, all we can do is carry on as best we can.