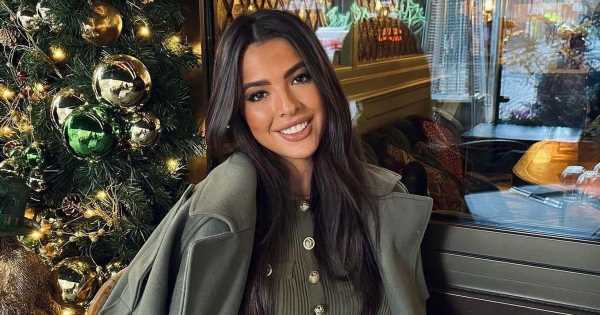 Love Island star Gemma Owen has revealed that she is feeling rather disordered as she kicks off the festive season.

Having just touched down in the UK after a 72 hour vacation in Los Angeles – her first ever trip to the States – the international dressage rider, 19, has already squeezed a gig at the London International Horse Show before heading home to Lower Soughton Hall in Cheshire to spend Christmas with her family.

But a "really disorganised" Gemma says "I really need to get my act together as she tells Tatler magazine she's not yet started any of her Christmas shopping yet.

But Gemma is feeling the pressure of getting her act together when it comes to her Christmas plans, during the festive celebration in the Owen household "kind of a big deal".

"It's always a really special day," Gemma speaks of 25 December. "And I think with everything being so busy recently, I am really excited to just spend some quality time with the people closest to me, with my loved ones."

Having had "the same Christmas Day for as long as I can remember", the former Islander admits she "can't wait" for the big day, which apparently starts at 6am, seeing sees her sisters Emily and Jess and mum Louise Bonsall waking each other up to open presents.

By the time gift-giving is out of the way, it's horse-rider Gemma's time to visit her fury friends in the nearby yard for a bit of "mucking out, feeding, yada, yada".

By this point in the early morning, the "rest of the family [former Premier League footballer dad Michael Owen and brother James] is up".

After gift-giving, the family-of-six head over to Gemma's paternal grandmother's house – conveniently on the same road, a short drive from Lower Soughton Hall – for breakfast and a "good vibe".

Michael's mum's Christmas morning spread reportedly consists of bacon, sausages and egg sandwiches which is gobbled up by the family – alongside some more present-giving – before the Owens head home to welcome mum Louise's side of the family.

But how many hungry-mouths can the Owens usually expect to feed for the big festive lunch? Well, none, apparently, as they order in "luxury" private catering from dad Michael's friend.

"It is obviously massive," says Owen. "We've tried several things. We've got too many people to eat out. But then in previous years we have tried everyone having their individual things to bring in and helping in that way."

Gemma also claims that her family are "not big gift givers", with her parents' main present to the family being an incredible dinner and Christmas party.

On top of the loving catch-ups with her fellow family members, Gemma also reveals that dad Michael will be DJ'ing some Christmas tunes, having a soft spot for Christmas songs and "old classics", playing music so loud that diners can barely hear each other.

But what do a family as lavish as the Owens give each other for Christmas? Apparently, past examples have included a pool table and a swimming pool…

"My mum and my dad love Christmas equally. But my dad is a true host," she reminisces. "He loves having family friends round and entertaining. That's when he really comes into his own… and he's definitely the funniest and loudest on the table."

According to Gemma, the night usually ends competitively with a game or sporting match, frequently being darts, one of Michael's favourites.

Despite claiming "none of us are actually that good," Gemma claims, "the competitive side comes out".

So, when she's not worrying about getting prepared for her grand Christmas soiree, what has youngster Gemma got in store with regards to future plans?

Well, the star admits she's in "very early discussions" surrounding her very own fly-on-the-wall reality show, claiming she loves the idea of being back on TV, but is "exploring all options" at the moment.

On top of this, Gemma promises she'll carry on competing in her dressage competitions in a bid to return to the high status she had prior to venturing onto Love Island.