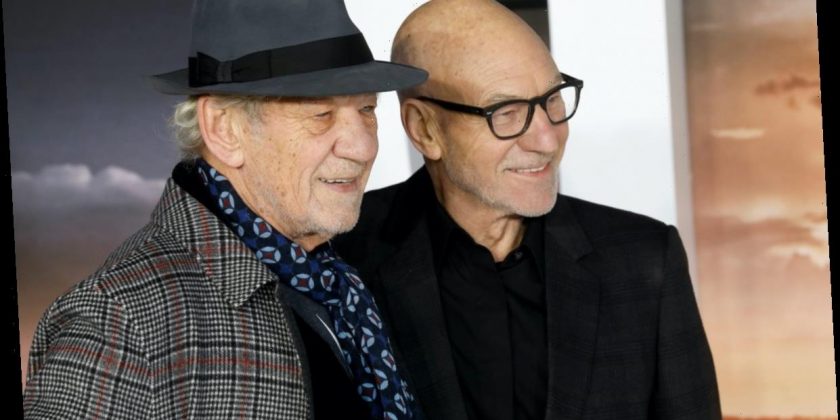 Ian McKellen and Patrick Stewart have a lot in common. Both are Hollywood A-list celebrities. Both have starred together in the X-Men film franchise. Both have been nominated for some of the film industry’s most prestigious awards, including Golden Globes, Saturns and Screen Actors Guilds. And both were knighted by Queen Elizabeth II.

Despite McKellen and Stewart playing characters in X-Men who were sworn opponents, the two stars are actually best friends in real life.

And when Stewart got married a few years ago, McKellen’s comments about his friend’s wedding ceremony raised eyebrows.

Stewart got married in 2013

News broke in 2013 that Stewart, then aged 72, was going to marry Sunny Ozell, a singer-songwriter who is nearly 40 years his junior. According to the New York Times, the two met while they were both working on Macbeth. The publication also announced that Stewart’s X-Men costar McKellen would be conducting the wedding before both men returned to shooting the next X-Men film.

“Sir Ian McKellen has announced that he will be officiating at the wedding ceremony,” explains the Times, which then added that McKellen “is still unsure by what legal means he will be able to join the couple.”

That line turned out to be a bit of a premonition.

Fans were surprised to learn where Stewart’s wedding took place

McKellen was excited to be involved in his friend’s wedding, and McKellen made the first public announcement of his role in Stewart’s ceremony to British talk show host Jonathan Ross.

The words he chose to make his announcement caught fans’ attention: “‘I’m going to marry Patrick,’ he told the UK chat show host,” reports the BBC, “before pausing and reconsidering his statement. ‘How else do you put that? I am going to officiate at his wedding.’”

McKellen’s humorous word mixup wasn’t the only surprise that came out of the occasion. Fans were also surprised to learn that Stewart’s ceremony took place in a Mexican restaurant.

“‘We learned that McKellen could not use his credentials in Nevada, which is where we were getting married,’” McKellen is quoted as saying in The Hollywood Reporter. But McKellen’s credentials did work in the neighboring state of California.

“So we invited Ian and two of our guests and a (theater) director to a Mexican restaurant,” recounts Stewart. “And they were really closing down when we got there, it was pretty late. And Ian had brought with him a kind of robe — but our guests had no idea what was happening. And…we were formally married in a Mexican restaurant.”

Some couples might be frustrated when their officiant doesn’t have the right credentials. Thankfully, McKellen and Stewart have had a very close friendship for many decades.

Stewart and McKellen’s relationship goes back to the 2000s

“Patrick Stewart and Ian McKellen have one of the most well-known bromances in Hollywood, and it has been that way pretty much since they first became close some 20 years ago, ironically playing adversaries [in X-Men],” reports The Hollywood Reporter.

Since they first became friends, eTalk TV notes that the two have performed in the theatre together, been costars in several blockbuster films, traveled the world together, and even committed some public displays of affection.

“The Sirs have locked lips more than once for the cameras, and fans are there for it every single time, like [a] sweet peck during the premiere of the 2015 flick, Mr. Holmes,” reports the Canadian entertainment channel.