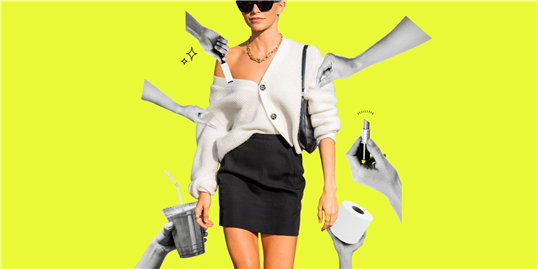 When you work on television and movie sets for a living, your employment is inconsistent at best. You’ll be on one project for a few months, then you’ll be scrambling to find your next gig. I was recently in this predicament, having just finished a job as a production assistant, when a friend of a friend connected me to their friend (yes, this is really how it works) who happened to be the former personal assistant to a Very Important TV Star. That former assistant recommended me for their old job and…here I am. Since I’d already been tending to multiple actors on-set, I figured there was no way it could be harder to tend to just one, right? Well.

The thing is, if your boss is famous enough, like mine is, an assistant’s role is basically to take their place in “normal” life. I do things like order their lunch, answer their emails, make all their hotel reservations under an alias, and run across the city to fetch birthday gifts for their A-list friends (who never know the card in the box was written by me). To help my boss avoid getting bombarded by photographers and fans, I also take their kids to the park and sign for their packages—nobody wants to be papped like Ben Affleck dropping his Dunkin’ while opening his front door.

I know entire staffs at restaurants so we can walk through the kitchen instead of the main entrance, and I have the key to the back door of my boss’s favorite hotel so that we can avoid reporters out front. My boss’s movements are always intentional and direct—our time outside is basically going door to door with no ambling or meandering. I’ve seen firsthand how weirdly isolating life can be for really famous people.

And I do feel bad about that. But…being a celeb’s personal assistant is also essentially like adopting a human child in the body of an adult. I’ve been tasked with cutting up my boss’s lunch into bite-size pieces. And with being their wake-up call every day (like, they don’t set alarms—I am the alarm). And with, one time for a previous boss, getting eight smoothies from Joe and the Juice at once because they couldn’t decide which to order. Eight smoothies. They took a sip of each flavor, threw out the seven they didn’t like, and didn’t even flinch.

Which brings me to the diarrhea incidents. You read that right: incidents, plural, on multiple jobs. I’ve had to lie and take the fall when my boss was late after a case of the runs. When they took forever in the bathroom, I had to call in to tell the production team that it was my fault: I “confused the call time” and “overslept.”

Okay, yes, there are also supremely glamorous parts to being a personal assistant, like casually chartering private jets, being gifted bottles of wine that cost more than a month’s rent, and having Idris Elba on speed dial (yes, I do, and yes, it’s tempting, but sadly I refrain bc professionalism).

Also, this job does come with, in a strange way, a sense of power. Hollywood is full of gatekeepers, and I am my boss’s. Any information that goes to my boss goes through me first, whether it’s an executive asking to make dinner plans or a director working out a creative vision. I even get to do a first read of scripts for movies my boss might star in. And not gonna lie, saying no to some of the most important people in Hollywood is really, really fun.

So while I definitely do get a lot of bullshit thrown my way, I’m hanging on to the possibility that all of this crap (see what I did there?) may eventually be worth it. I’m in rooms with some of the biggest names in show business, and if you’re working your ass off, you never know where it may lead. Currently, it’s leading to a collection of fancy-ass wine, and that’s fine by me—for now.