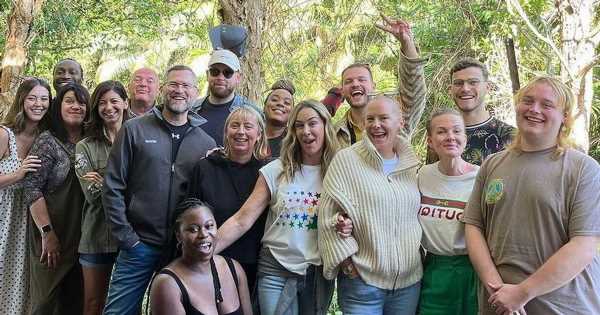 The families and friends of this year's I'm A Celebrity… Get Me Out Of Here! contestants have touched down in Australia.

The official Instagram account for the ITV show shared a sweet photograph of the campmates' loved ones together on 18 November. The group photo was shared alongside the caption: "It's official… The Campmates' family and friends have arrived in the jungle! #ImACeleb."

They began arriving earlier this week ahead of the first elimination of the series, which saw Loose Women host Charlene White, 42, sent packing during Friday's live show after she received the fewest amount of votes from the public.

Charlene's younger sister can also be seen in the group photo, shortly before she headed to greet her older sibling on the I'm A Celeb bridge after she was eliminated from the show.

Many fans were quick to notice Mike Tindall's wife Zara, 41, was missing from the snap, and Babatunde Aléshé's wife Leonie was also absent.

In previous series, the campmates' loved ones, as well as any evicted celebrities, stayed at the luxurious Palazzo Versace resort, which always then features in the Coming Out show which allows viewers to catch up with the celebs after the series has come to a close.

However, this year the contestants and their family members will reside at the JW Marriott Gold Coast Resort and Spa, where room prices begin a £256. Prices at the Versace resort are believed to begin at around a whopping £1,000.

In the first public vote of the series, Charlene and Sue found themselves in the bottom two after receiving the least amount of votes from fans at home.

Ant and Dec then announced Charlene would be waving goodbye to the jungle for good.

In her interview, she said of her time in the I'm A Celeb jungle: "It was emotional. To use that ridiculous American phrase, It has been a journey, and I've absolutely loved living with those guys. Every single one of those guys have been great."

Im A Celebrity…Get Me Out Of Here! airs everyday on ITV at 9pm.