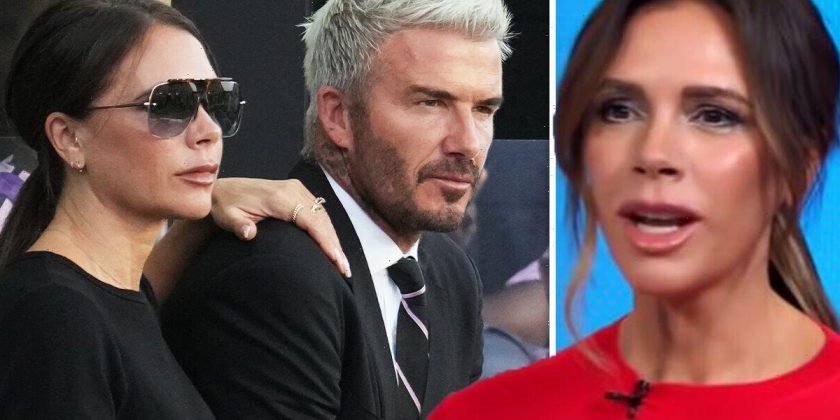 Victoria Beckham has told of her heartbreak over her family’s “new chapter”. The fashion designer, 48, spoke candidly on the subject of her family after revealing that she now only has daughter Harper home full time.

Brooklyn and Nicola wed at her family’s Miami oceanfront mansion in a ceremony which reportedly cost £3million.

The duo tied the knot at the £76 million luxury home in an event which saw the best of Hollywood’s A-listers descend to witness the nuptials.

Following the event, Victoria confirmed that Brooklyn has made the move to America, adding that she misses him “so much”.

The former Spice Girl said: “David and I have gone from having four kids at home to having one-and-a-half.

“Brooklyn and Nicola are going to be living between LA and Palm Beach, Romeo’s living in Miami, and Cruz is in-between home and boarding school.”

Ther mother of four added that despite living in London, she still regularly travels to the States for her work.

“And my beauty team, which is a super-important part of my business, is based in New York, so I go there a lot, too,” Victoria explained.

However, she went on to add that the UK’s capital will always be home for their family.

Victoria said: “But London is where I come to the office every day and where Harper goes to school.

“This year is a new chapter for my brand, and for our family – but London is still home,” she added to Grazia magazine.

In the UK, the Beckhams split their time between their two homes.

When in London, the family stay at their Holland Park Home but also enjoy spending time at their £6million Cotswolds home.

Victoria took to Instagram on Sunday to share a picture of Brooklyn with his youngest sibling Harper Seven.

The lookalike siblings can be seen smiling at the camera while holding a dog each in the tender snap.

It comes as the newlyweds looked as loved up as ever as they shared a glimpse into their first trip to London since tying the knot.

The newlyweds also caught a snap outside the Glassblower pub in Soho as Nicola placed a tender kiss on her beau’s cheek as he gave her a piggy-back.

Brooklyn isn’t the only sibling with marriage in the air with rumours circulating earlier this month that second-eldest Romeo Beckham, 19, was “ready to marry” his girlfriend Mia Regan.

The young couple recently celebrated their second anniversary, and are reportedly looking to the future.