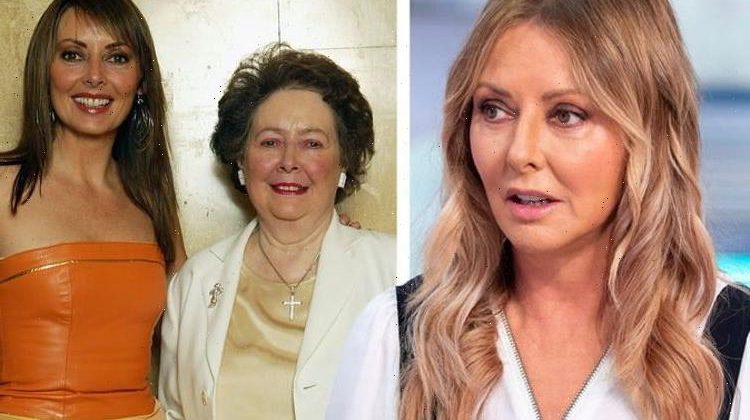 Carol Vorderman worries she was suffering with S.A.D

Carol Vorderman, 61, remembered the day her late mum known as Jean – real name Edwina – told her to leave the family home in Wales when she was 20 years old, and never come back. The Countdown star revealed she never stepped foot in the country “for a very long time”.

[She] told me I couldn’t go back home

In view of her 205,000 followers on Instagram, she penned: “Happy Welsh Valentine’s Day. For some they say I love you (Dwi’n caru ti) to their beloved. For me I say Iove you to my country.

It brought back fond memories but also dark ones, as she continued to tell the devastating tale about her mum splitting up with her step-dad.

She went on: “A real and visceral longing for the homeland which grows ever stronger.

“I grew up in Wales and only known Wales for my first 20 years and then my Mum left my stepfather (who I ADORED) and told me I couldn’t go back home.

“So I didn’t for a very long time. I had to block it out.

“This was before the Internet was even created. Only letters and sporadic phone calls kept us in touch with family back then.

“Now I’m there half of the year at least and growing.”

Jean died in 2017 at the age of 88, following her fourth battle with cancer.

A heartbroken Carol previously admitted that it “took time to come to terms with losing” her mum and said she now has “no responsibilities”.

Carol said: “From the age of 21, I’d loved looking after Mum. I employed her full-time from when I was 25. We always lived together.

“Now that Katie and Cameron are grown up, I realise this is the first time in my life I’ve had no responsibilities.

“It’s an amazing feeling of freedom. I’ve fulfilled my duties and earned the money, and looked after a lot of people.

“Now it’s about what I choose to do. I’m relaunching, re-engaging and ready for this incredible new chapter.”

Carol announced her mum’s passing on the day of the funeral, as she took to Twitter to pay tribute to her rock.

In a heartbreaking message, Carol tweeted: “Some days are tough, today was one of them. Today was my amazing Mum’s funeral…

“Rest In Peace Jean Vorderman. You will always be loved.”

Jean had been diagnosed with terminal cancer just three months before.

She had battled three different forms of cancer over the last 12 years, including skin cancer and kidney cancer, and she also had an ovarian tumour removed.

The pair were very close, and the presenter Carol revealed that her mum was the driving force that pushed her to go for the Countdown role that made her famous.