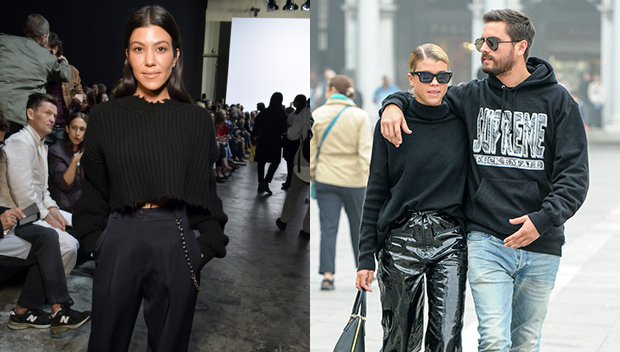 Now that Kourtney, Scott and Sofia are acting like one big happy family, we want to know the secret to being friends with your ex’s new love.

How did they do it? That’s the question that Kar-Jenner fans everywhere had on their lips in December 2018 when Scott Disick, 35, shared an Instagram photo of himself sunbathing in Mexico, slap bang in between his ex, Kourtney Kardashian, 39, and his girlfriend, Sofia Richie, 20. Scott cheekily captioned the pic, “What more can a guy ask for. [sic] THREE’S COMPANY.” A month later, in January 2018, Kourtney was totally unfazed when a fan asked her via Andy Cohen on Watch What Happens Live what her reaction would be if Scott proposed to Sofia. She said, with a smile on her face, “Congratulations.”

So, are Scott, Kourtney and Sofia unicorns? Or, is it really possible to be friends with your ex and his new boo? If so, how do you get to that point? We reached out to top relationship expert Dr. Wendy Walsh for tips. The author, who has a PhD in clinical psychology, has plenty of relationship advice, especially for women like Kourtney, who have kids with their ex. (As fans know Kourtney and Scott have three children together – Mason, 9, Penelope, 6, and Reign, 4.) Dr. Wendy tells HollywoodLife EXCLUSIVELY that it’s best to take the “high road,” because the smart move in this situation is to “try to forge a healthy relationship” with your ex’s new squeeze. We whittled down her relationship advice into three key tips:

1. Respect your ex’s new partner. “They’re a human being. Whether you like it or not they’re going to have an influence on your kids’ life,” Dr. Wendy tells us. “If you leave your kids with him for the weekend, that other woman may well be parenting your kids. So understand the responsibility.” She also recommends that you have patience with your man’s new girlfriend, especially if, like Sofia, they’re not a mom yet. “If you try to talk down to them and try to tell them how to parent, you’re only going to alienate them,” Dr. Wendy says. “So, it’s more just developing a rapport, getting to know somebody, respecting their strengths, as you would forge any other type of relationship.”

2. Socialize. Yes, really. Dr. Wendy says including the new woman in family events is key, especially if that person has long term potential. “Don’t exclude her from the Christmas concert,” she says. “Don’t exclude her from the elementary school graduation. Don’t exclude her from parents’ day because this is for sure creating alienation. I know there are lots of women out there who want to have a pretend, fantasy family, like they’re still back together, like their original family unit. So they say, ‘Don’t bring your new person to the school. I don’t want them there.’ Well, you’ve now set up a wall, a boundary, and you’re alienating that person.”

3. Speaking of boundaries, Dr. Wendy says there’s a time and a place for them. For example, if you don’t like your ex’s new partner and you think she is a bad influence on your kids. In that case you don’t have to be friendly, per se, but civil and firm. If necessary, document what you will and won’t accept and make it part of your separation or custody agreement. “Let’s say for example, your ex’s new love uses drugs and alcohol and you’re really worried about the safety of the kids, especially if he’s busy working and he calls her to pick up the kids at school, because it’s his week,” Dr. Wendy says. “You don’t want your kids driving in a car with that person. That’s why it has to become legal. You have to make a legal agreement. Get it in writing.”

But what if you and your ex don’t have kids, but you’re still friends and you want to keep things that way, especially if you run in the same social circle? That’s an easy fix, Dr. Wendy says. “Welcome your ex, as a couple, into your life,” she says. It seems that Kourtney, Scott and Sofia may be on to something after all!

For more relationship advice from Dr. Wendy check out her new podcast, Mating Matters, which is released on Valentine’s Day.