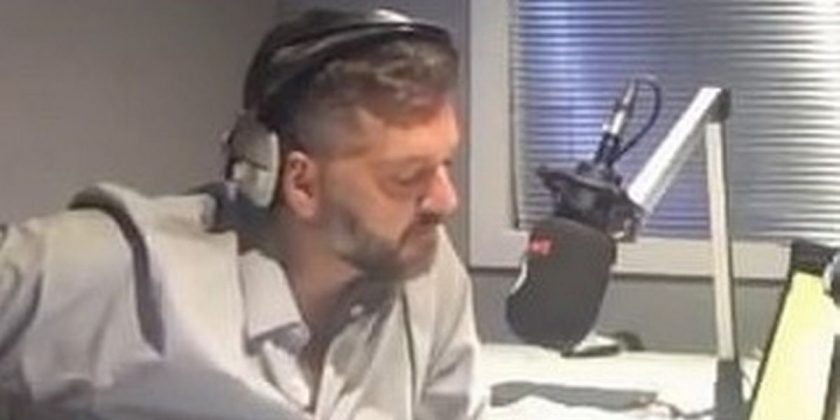 Iain Lee’s ability to empathise with a suicidal man played a huge role in helping to save his life during a live radio call-in on Wednesday night.

The I’m A Celebrity star had been hosting his show on TalkRADIO when a caller named Chris rang in to say he’d taken an overdose and was lying in the street dying.

Quick-thinking Iain immediately found out where Chris was and kept him on the line for half an hour, listening to his problems and telling the PTSD sufferer that he loved him.

With the help of his producer Katherine Boyle, the two were able to track Chris down and send the emergency services 240 miles away to get Chris the help he needed.

And Iain has been praised for his empathetic listening skills, especially after he himself discussed having suicidal thoughts in the aftermath of his split from his wife.

Just last month, the 45-year-old presenter and comedian tweeted that he’d come off anti-depressants and was in a "f**king dark" place.

"Coming off anti-depressants. Sweet lord. It’s hard. Harder than coming off a coke binge. Much harder. More emotional. Longer. Drawn out. So f**king dark," he told his followers.

"Was in pieces last night. Suicidal. Luckily I have a good mate to talk me off the edge. But people need to know how tough these drugs are to come off. Torture. Absolute hell."

But he pledged to help others feeling the same way, telling followers: "Please find the strength and focus to find the way out of your darkness. There is light. There really is."

In May this year, Iain revealed he had been sexually abused as a child by a Scout leader, which triggered his depression at the age of eight.

"A lot of my depression comes around self-loathing, shame and guilt. How do I say this? There was a bit of sexual abuse that went on as a kid. A scout master and stuff, which kind of weighed heavily on me," he told Channel 4’s Me And My Mental Health documentary.

"’It is the most horrendous messed-up scenario, it was humiliating and it was shameful, and I remember getting home to my mum and dad and never telling them. I never told them."

He went on: "I think it certainly played a part in my depression, what happened to me at the age of eight. I can see that as the starting point for it. Because up until then the memories I do have are generally quite happy.

"Now I feel embarrassed and ashamed talking about it, it was 35 years ago."

And he admitted that appearing in 2017’s I’m A Celebrity series had messed with his head, leading producers to offer to pay for therapy after he placed third.

"I want to come off my anti-depressants, because there was a minor relapse a few weeks ago with stuff going on. The jungle was weird and had a profound effect on me.

"The best way I can describe it… after I took LSD for the first time, and I’ve only done it a handful of times, for the next year at least I saw and perceived everything differently."

Now listeners to his show have thanked Iain for keeping his cool during the harrowing phone call with the suicidal man, with one branding Iain a "real-life hero".

"Hope you are ok, this can be traumatic. Don’t be too proud to ask if you need help," one told him.

Another said: "I have suffered with mental issues in the past and if it was not for friends and family being there for me I dread to think what state I would be in now. Iain did something amazing on Wednesday night and should be praised not criticised."

And a third wrote: "Brilliantly done, thanks goodness Iain has the empathy to keep him talking and even more importantly Chris found the courage to talk. Wishing them both well."