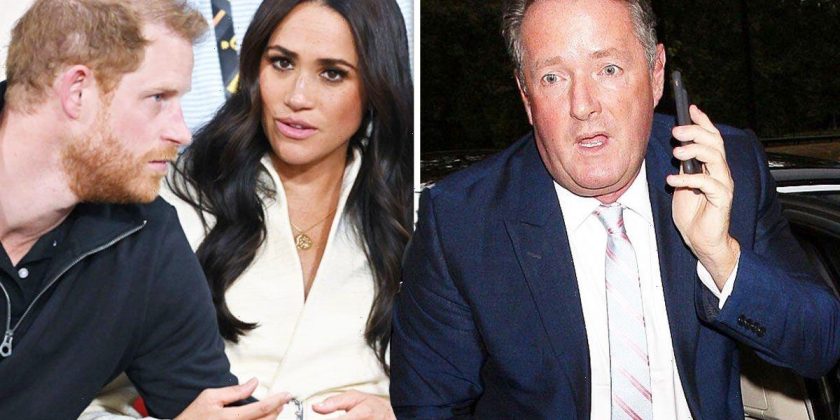 Netflix has cancelled the development of an animated series created by Meghan Markle in its move to cut costs. Piers Morgan has since taken to Twitter and addressed a report which suggested “unroyal reality kicks in”.

Last month, Netflix revealed a sharp fall in subscribers and warned millions more are set to quit the service.

Prince Harry and Meghan announced their deal with Netflix in September 2020 but they are yet to produce any content for the platform with several reports claiming their production deal could be worth in excess of $100 million (£72m).

One of the projects announced was an animated series with the working title ‘Pearl’ which focuses on the adventures of a 12-year-old girl who finds inspiration in a variety of influential women throughout history.

The TalkTV host has since addressed reports Meghan’s series has been dropped by the streaming service.

In view of his 7.9 million followers, the 57-year-old retweeted an article that read: “EXCLU! #MeghanMarkle series cut by @netflix as unroyal reality kicks in for stock sagging streamer.”

Piers replied: “Oh no! I do hope nobody rang the boss of Netflix to demand they fire her…”

The Uncensored host’s swipe comes over a year after he quit Good Morning Britain after he made remarks about the Duchess’ interview with Oprah Winfrey in March 2021.

At the time, it was reported by Chris Ship, ITV’s royal correspondent, that Meghan “formally filed a complaint” to ITV and had “raised concerns” about Piers’ comments directed toward her.

Some social media users were also unimpressed by Piers’ remarks with viewers lodging complaints to the UK broadcast regulator Ofcom.

Meanwhile, Netflix has addressed the recent fall in subscribers to the streaming platform that wiped over $50bn off the company’s market value as experts warned it faced a struggle to get back on track.

In April, Netflix said its total number of subscribers had dropped by 200,000 in the first three months of this year, falling well short of its target.

It also warned that some two million more users were likely to quit the service in the three months to July.

Archewell Productions, the company formed by the Duke and Duchess of Sussex, announced last year that Meghan would be an executive producer of Pearl.

At the time of announcing the project, Meghan said of the show: “Like many girls her age, our heroine Pearl is on a journey of self-discovery as she tries to overcome life’s daily challenges.

“I’m thrilled that Archewell Productions, partnered with the powerhouse platform of Netflix and these incredible producers, will together bring you this new animated series, which celebrates extraordinary women throughout history.”

Pearl was expected to be the first animated series created by the production company.

Despite dropping the show, sources claim Netflix remains optimistic about the Archewell deal.

The streaming giant will continue to work on a number of projects with Archewell Productions, including a documentary series called Heart of Invictus.

The series will focus on athletes competing in the Invictus Games for injured veterans, an event founded by Prince Harry, in The Hague in 2022.

The Duke and Duchess were accompanied by a filming crew from Netflix when visiting The Hague last month.