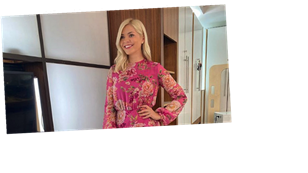 Holly Willoughby has shared a rare photo of all three of her children together as they set up a Harry Potter-inspired photoshoot in their garden.

The This Morning presenter, who is a mother to Harry, 11, Belle, nine, and Chester, six, with husband Dan Baldwin took to Instagram to share the adorable photo as the kids dressed up.

In the snap, the children are wearing clothes from Marks & Spencer, which Holly is the face of, as they played around with witches hats and brooms.

Adorable Belle is seen dressed as Hermione sitting on a cloud made of bed sheets in a bright blue dress while she holds a makeshift broom, while her brothers Harry and Chester are seen dressed for the part as Harry and Ron in a striped jumper and school backpack.

The 39-year-old even impressed fans by revealing she had taken the snap herself, writing alongside the image: "Harry (Harry), Hermione (Belle) & Ron (Chester) quarantine project continued…

It comes after Holly shared a photo of her son Chester which she said is “killing” her husband Dan.

The TV star posted an adorable photo of her son and made a tribute to him on Instagram.

Holly’s snap shows her beloved youngest son standing in front of a Chelsea football team-themed cake, which has a blue football shirt made of icing with Chester’s name on.

The two-tier cake has a number of blue stars on top and several lit candles.

In the caption Holly, who was recently tricked into believed Piers Morgan is dead by cruel pranksters, admitted the photo may infuriate her husband Dan Baldwin as she made a tribute to her son.

TV star Holly confessed: “If anyone knows my @arsenal loving husband you’ll know how much this Cake for Chesters birthday is killing him…”

She then quipped: “I blame you entirely @franklampard”.

Holly, who recently gave fans a peak at her garden, then went on to make a sweet tribute to her little boy.

She continued: “However that’s our boy all over… marching to the beat of his own drum, spreading absolute joy wherever he goes …

“we love you so very much Chester Chops… how is my beautiful baby 6 already!”