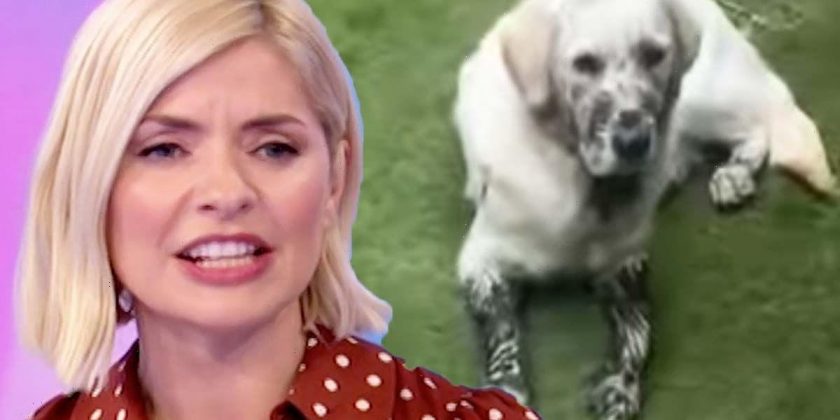 Holly Willoughby has taken to Instagram to share an update after finding her dog, Bailey, covered in soil. The This Morning presenter, 41, made the discovery on Wednesday as she took to social media to share a video of her family’s beloved pooch completely covered in mud after having dug up their garden

In a video shared in view of her 7.7 million followers, the dog could be seen looking directly at the camera and covered in mud.

Bailey looked mischievous after digging up one of the flower beds.

The ITV presenter conveyed her shock by captioning the post: “Bailey!!!!!!”

But it was not the first time this week that Holly gave her followers an insight into her private life.

On Monday, the TV star shared a photo of her lookalike mum, leaving fans stunned over the resemblance.

Sharing a smiley picture of the pair sharing a hug in the garden, Holly gushed over the “life lesson” her mum gave her.

“When my mum woke this morning she said to me… ‘I know he loves me, because after I watered the garden this morning my feet where so cold so he took his warm slippers off and gave them to me…’ (sic)

The Freeze The Fear star signed off the caption with the hashtags “#truelove” and “#couplegoals”.

“Another year of love has gone by and continues to grow stronger!

C8tyf added: “Wow 45 years they must have married so young they look amazing.

“I’m 37 years married and I thought that was an achievement.

“Happy anniversary to your parents & here’s to many more happy years.”

Other online users pointed out Holly and her mum’s similar appearances, with Ltfam878 pointing out: “She’s just like you!”

Karenowen2011 typed: “I can see where Holly gets her glorious smile from. Happy Anniversary.”