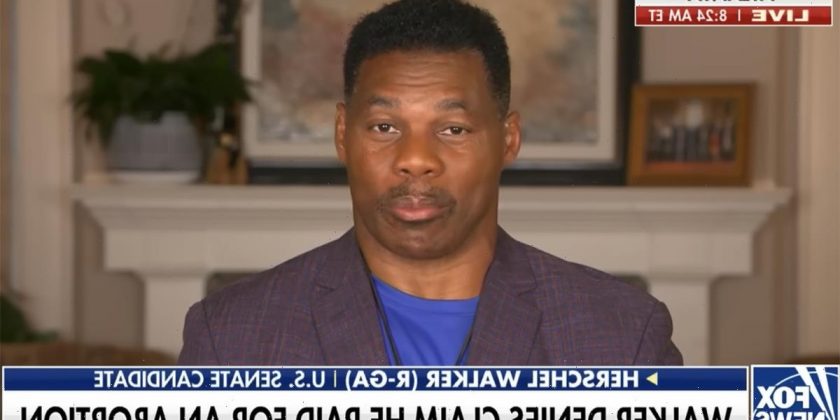 For those who haven’t heard about the scandal, the Republican candidate for Senate in Georgia has been staunchly anti-abortion. It’s one of the cornerstones of his conservative platform. In fact, he wants an even stricter national abortion ban than most, saying there shouldn’t even be exceptions for rape or incest, insisting abortion is equivalent to murder.

Yet on Monday a bombshell report dropped seemingly showing he felt abortion was just fine — if the choice was his. A woman told The Daily Beast that Walker had paid for her to have an abortion in 2009, telling her it wasn’t a convenient time for him to have a child with her. She even showed the outlet the receipt for the procedure and the “get well” card he allegedly sent her, in which he wrote:

“Pray you are feeling better.”

Oh man, he’s even invoking religion in the card he sent the woman whose abortion he paid for? He also signed it. Again, we can’t confirm any of the Daily Beast‘s vetting of the materials, obviously — but we imagine NFL swag aficionados will be able to independently verify the all-star running back’s signature.

Naturally, in our post-Donald Trump world, the go-to maneuver in cases like these has devolved into the same as a frat guy caught cheating on his girlfriend; deny, deny, deny. Herschel not only called the abortion story a “flat-out lie,” he threatened to sue The Daily Beast. He claimed he had no idea who the woman could possibly be who was making the allegation.

On Wednesday, the woman responded by revealing the reason she’d tried so hard to keep her identity under wraps: a few years after that abortion, Herschel Walker had gotten her pregnant again — and this time she’d kept it. That’s right. This woman says she is Walker’s baby momma!

Well, that narrows it down… but not as much as you might think. See, back in June the Daily Beast previously broke the story that Walker was misleading the public about having only one child. As a big family values proponent, he routinely blasted men who had children out of wedlock and didn’t stay, saying the “fatherless home is a major, major problem” for the Black community specifically. He also doted on his 23-year-old son Christian Walker, even referring to him as an only child. But reporters found out he has another child, a son he has not supported financially. Court records showed that child’s mother had to sue the football star for child support.

First Herschel’s campaign manager confirmed the secret child. Then the candidate himself responded to the report — by revealing in a statement to the outlet that he actually has FOUR CHILDREN with FOUR DIFFERENT WOMEN — the three secret ones being a 10-year-old son, a 13-year-old son, and a 20-year-old daughter. He says he “never denied” he had more children, he just didn’t use them as political “props”:

“I have four children. Three sons and a daughter. They’re not ‘undisclosed’ — they’re my kids. I support them all and love them all. I’ve never denied my children, I confirmed this when I was appointed to the President’s Council on Sports, Fitness and Nutrition, I just chose not to use them as props to win a political campaign. What parent would want their child involved in garbage, gutter politics like this?”

That’s an impressive spin move from the NFL icon, but it’s also total B.S. He absolutely was misleading the public, positioning himself as a pillar of virtue while attacking others single parents and men who impregnated and ran away. But of course that was just the tip of the iceberg of this man’s hypocrisy.

As the woman who claims he encouraged and paid for her abortion said:

How is Walker responding to all this now that it’s pretty clear the woman’s claim is credible? By going back to his old pal Teflon Don’s deny-til-you-die strategy, saying in a statement:

“As I have already said, there is no truth to this or any other Daily Beast report.”

ANY Daily Beast report? Even the one you already confirmed? Yep! In an interview with ultra-conservative radio host Hugh Hewitt, which should have in theory been a softball, Herschel basically scored an own-goal. (Yes, that’s lots of different sports metaphors, whatever, we don’t care.)

When asked if he now knew who the woman in question was (surely he could have narrowed it down to one of three), the candidate went back to denying even the original story, saying:

“I have no idea at all, and that’s the problem, is you know, when they said I had a kid that I was hiding, a lot of people don’t know that this same reporter found out that this was not true, never wrote a retraction, never said anything.”

Sorry, never wrote a… IT WAS TRUE! THOSE KIDS ARE YOURS! YOU ADMITTED TO IT! WTF are you talking about, man?!

He also seemed to say that even if it were true, he’s already been “forgiven” so it’s not that big a deal. (We assume he means in his faith?) He told the host:

“And they can keep coming at me like that, and they’re doing it because they want to distract people. I know that, because you know, I’ve already been forgiven. And if I’ve been forgiven, why in the world would I not be forgiven of something like that?”

Despite what should be the nail in the coffin of Herschel’s Senate run, big shocker: many members of the GOP have rallied around him. Why? What about their morals? Kiiiinda feels like that whole “pro-life” thing is great for controlling women but less of a dealbreaker when it’s inconvenient for them.

As of now, Herschel Walker is not stepping down, and he is still on track to face Raphael Warnock in Georgia’s midterms in November. We guess we’ll see next month if Republican voters feel equally ambivalent