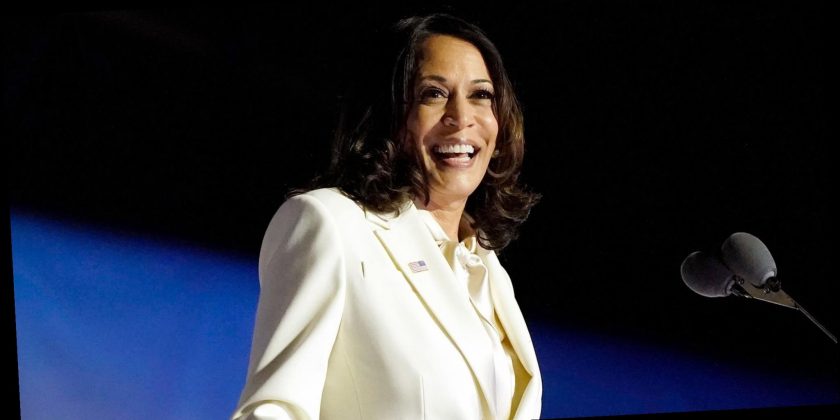 History in the making! Joe Biden‘s 2020 presidential election win was a miraculous feat — but he couldn’t have done it without Senator Kamala Harris by his side.

On Saturday, November 7, the Biden-Harris ticket emerged victorious over President Donald Trump and Vice President Mike Pence. Harris, 56, is the first woman, the first Black person and the first South Asian to be elected vice president.

The longtime politician began her impressive career as district attorney of San Francisco, California, in 2004. She held the seat until 2011 and was the city’s first person of color to be elected district attorney. Harris worked her way up the ranks, serving as California’s attorney general from 2011 to 2017, taking over from Jerry Brown.

Throughout her career, Harris has been no stranger to breaking barriers. After winning her race in the 2016 Senate election, she became the second Black woman and first South Asian American to serve in the Senate. As the daughter of both a Jamaican immigrant and a native Indian, Harris’ fearless demeanor was instilled in her from a young age.

“My mother, who raised me and my sister, was a proud woman,” Harris recalled in a November 2019 video. “She was a brown woman. She was a woman with a heavy accent. She was a woman, who many times people would overlook her, or not take her seriously. Or because of her accent, assume things about her intelligence. … Every time she proved them wrong.”

In January 2019, Harris officially announced her candidacy for president of the United States. Though she was briefly considered a top contender, she suspended her campaign just under a year later. She quickly threw her support behind Biden, who confirmed in August that he had selected Harris as his running mate. After making history once again, Harris sent an inspiring message to young girls around the country.

“While I may be the first woman in this office, I will not be the last,” Harris said on Saturday night. “Because every little girl watching tonight sees that this is a country of possibilities. And to the children of our country, regardless of your gender, our country has sent you a clear message: Dream with ambition, lead with conviction and see yourself in a way that others might not see you, simply because they’ve never seen it before. And we will applaud you every step of the way.”

Scroll down to learn more about the Vice President-elect!