Lady Colin Campbell, 71, has written a number of books on the Royal Family and is known for giving her views on their exploits. After Prince Harry appeared on a podcast with Dax Shepard in the US earlier last week, the aristocrat did not hold back in giving her opinion on the latest revelations from the Duke of Sussex.

Lady Colin said she thinks Prince Harry is “lying to himself and the public” after he spoke about having more freedom in America compared to the UK.

She shared: “I can tell you Harry is lying to himself, if not to you, when he says the paparazzi are troubling him blah, blah, blah.

“And then he goes in the podcast to very pretentiously make out that fame is a terrible burden, being a public figure is an awful thing, that paparazzi are basically a nuisance.

“Harry goes on in this podcast about the fact that you should be entitled to privacy when you’re not on the job. 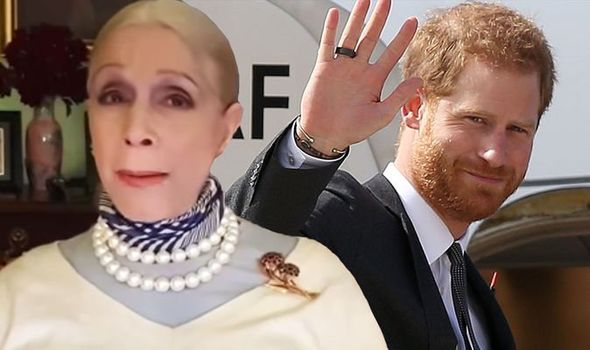 “The man’s deluded, he’s an idiot.

“Harry, fame and fortune – which you are desperate to increase – are blessings. You love them.

“Without the public, you wouldn’t have fame and fortune. You want to bat them away like they’re flies.”

It comes after his appearance on Dax Shepard’s Armchair Expert podcast, where  Prince Harry spoke about feeling freer in the United States.

The Duke said: “Living here now I can actually lift my head and I feel different, my shoulders have dropped.

“So have hers [Meghan Markle], you can walk around feeling a little bit more free.

“I can take Archie on the back of my bicycle, I would never have had the chance to do that.”

Prince Harry also opened up about his childhood further in the candid conversation with Dax.

“I don’t think we should be pointing the finger or blaming anybody.

“But certainly when it comes to parenting, if I’ve experienced some form of pain or suffering because of the pain or suffering that perhaps my father or my parents had suffered, I’m going to make sure I break that cycle so that I don’t pass it on, basically.

“It’s a lot of genetic pain and suffering that gets passed on anyway so we as parents should be doing the most we can to try and say, ‘You know what, that happened to me, I’m going to make sure that doesn’t happen to you’.

“It’s hard to do but for me, it comes down to awareness.

“I never saw it, I never knew about it, and then suddenly I started to piece it together and go, ‘Okay, so this is where he went to school, this is what happened, I know this about his life, I also know that is connected to his parents so that means he’s treated me the way he was treated, so how can I change that for my own kids?’

“And here I am, I moved my whole family to the US, that wasn’t the plan but sometimes you’ve got make decisions and put your family first and put your mental health first,” he finished.

Prince Harry quit working as a senior member of the Royal Family at the beginning of last year.

He has since moved to Los Angeles with his wife Meghan Markle and their son Archie Harrison Mountbatten.