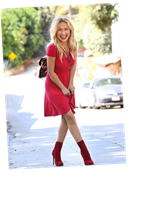 After more than a year of increasingly sad updates on the Hayden Panettiere situation, we finally have some good news to report.

If you’ve been following the actress’ struggles, you know that she spent an unfortunately long time trapped in an abusive relationship with a man named Brian Hickerson.

He was most recently arrested for such an attack on Valentine’s Day of this year.

Unfortunately, Hayden was afraid to testify against this monster, and so, he repeatedly walked free.

To make matters worse, despite repeated pleas from her family, Panettiere chose not to break up with Hickerson.

As with her refusal to testify, there’s a very good chance that that decision was motivated by fear for her life.

Fortunately, it looks as though the support of her loved ones and her own strength of will have led Hayden free herself from that dangerous situation.

Likely referencing Panettiere’s struggles with alcoholism, the insider went on to reveal that Hayden is “on the path to recovery.”

The source claims that Hayden has “has done a 180-degree turn since her terrible ordeal with Brian” and is back to being the person that her family knew so well before she was broken by her destructive relationship.

And it seems that Hayden is now hoping to revive her once-successful acting career.

“She’s moving ahead with her life and getting back into working in Hollywood and being creative again,” says the insider.

“It’s all very therapeutic for her,” the source adds.

Yes, with regular roles on Heroes and Nashville, Hayden was once among TV’s most in-demand talents.

And at just 30 years old, it’s certainly not too late for her to rebuild her career.

However, Panettiere’s top priorities these days are staying sober, rebuilding her relationship with her 5-year-old daughter, and keeping away from Hickerson.

The source says that Hayden is “calmer and more relaxed” these days, and she’s currently “trying to move past the pain and focus on her future.”

While this is not her first attempted breakup with Hickerson, Hayden’s loved ones are optimistic that this one will be permanent.

“He’s moved back to his hometown in South Carolina, and friends are praying this is the end of her journey with him,” says the insider.

Our thoughts go out to Hayden as she makes her way along the road to recovery.