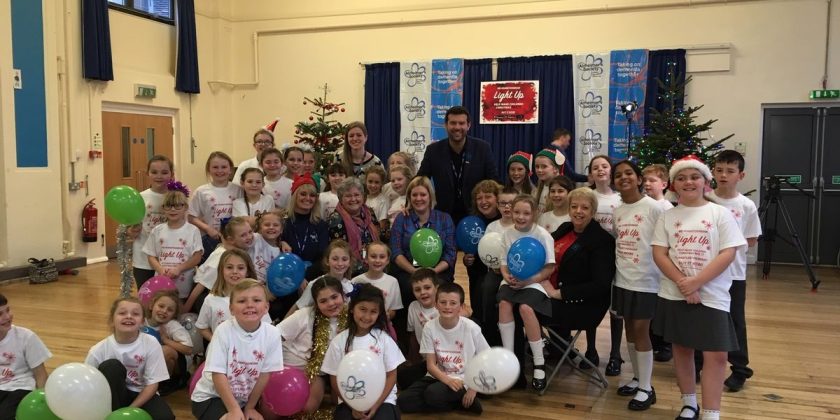 The happiest primary school in Britain is hoping to beat global superstars Ariana Grande and Miley Cyrus to the Christmas number one spot.

Flakefleet primary school in Lancashire reached number two in the iTunes charts after releasing their charity single called ‘Light Up’ with a zero budget.

Their video, featuring a local care home, was filmed on their headteacher’s phone.

The school will find out on Friday whether it has topped the official UK chart, which takes into account all downloads and streams.

Last month, the school – which is in a deprived area – was named the winner of the National Happiness Awards as the happiest primary school in Britain.

It was nominated because of the lengths teachers go to support their pupils with some washing their students’ clothes and discretely making up for missed Christmas present.

But the 470 pupils, aged between two and 11, from Flakefleet Primary School in Fleetwood, are now sharing that joy for the Alzheimer’s Society .

And already they have the celebrity backing from Stephen Fry and Alfie Boe, who was born in the town.

He explained how the idea came about after an assembly when one child said ‘I’d love to be a popstar and get to number one. ‘

"I know Arianna Grande is great, we all love her.

"But can you imagine if we could put our kids at the top, what message is that sending out? You have these dreams, go for it."

Talking about the charity, he told how his “special” grandmother, Doreen Ritchie, who is in her 90s and was diagnosed with the illness two years ago, no longer recognises him But he said before her diagnosis; “I didn’t know much about dementia. Now I want to raise awareness.

"She is still with us but she is bedridden and doesn’t know who I am. Life is pretty tough for everybody."

The song was written by children and staff at the school with the help of two unpaid producers, was recorded in the studio of its sister high school, free of charge.

The song’s lyrics include: “Light up light up someone’s Christmas and you might just light up your own.” and features the children spending time with the elderly.

After hearing it recently Stephen Fry tweeted: "This is wondrous. Go Flakefleet.’

The amateurs are hoping to overtake Ariana Grande, who has been number one for the past six weeks with Thank U, Next, a tribute to her ex-boyfriends,

while her new single Imagine was also released yesterday.

If the school tops the chart at Christmas, it will be the first time since 2015 for a charity single, the last having been A Bridge Over You by the Lewisham & Greenwich NHS Choir.

The head said: “The song is all about making time for others.

“Even if we don’t pull it off, I can’t tell you how proud I am to work at a school with staff and children who genuinely believe that we might just do it.”