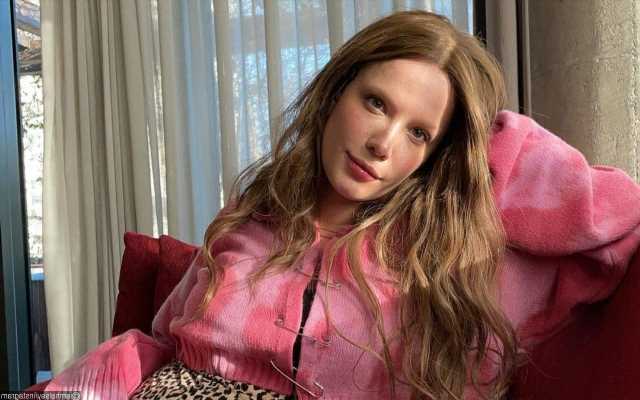 In the cute snap capturing the intimate moment, the ‘Without Me’ hitmaker could be seen sitting crossed-legged at a park with their newborn son Ender Ridley Aydin.

AceShowbiz –Halsey is celebrating world breastfeeding week. Marking the special occasion, the “Without Me” hitmaker posted a sweet nursing picture with their newborn baby Ender Ridley Aydin on their social media page.

The 26-year-old new mom took to their Instagram account to share an adorable picture of themselves while breastfeeding their 2-week-old son at a park. “#worldbreastfeedingweek [love],” the “Walls Could Talk” singer captioned their post, adding, “We arrived just in time!”

In the photo, Halsey, who shares their newborn son with screenwriter boyfriend Alev Aydin, could be seen sitting crossed-legged in the grass and smirking as they looked away from the camera during the intimate moment. For the outing, they sported a pink tank-top with printed palm trees. Meanwhile, the newborn looked cozy in a white T-shirt and purple pants with dog faces printed on them.

In the comment section, many of their fans and followers praised the sweet moments. “MOMMY HALSEY IS THE CUTEST THING I’VE EVER SEEN,” wrote a fan. On the other hand, another Instagram user chimed in, “This is so sweet and cute.”

Halsey first announced that they were expecting their first child in late January. A few weeks later, they clarified that their pregnancy “was 100% planned and [they] tried very hard for this bb.” They added, “But I would be just as happy even if it were another way.”

Halsey welcomed their baby boy on July 14. Nearly a week after giving birth, the “Bad at Love” hitmaker shared a photo of their bundle of joy on their Instagram page. “Gratitude. For the most ‘rare’ and euphoric birth. Powered by love. Ender Ridley Aydin 7/14/2021,” they captioned.