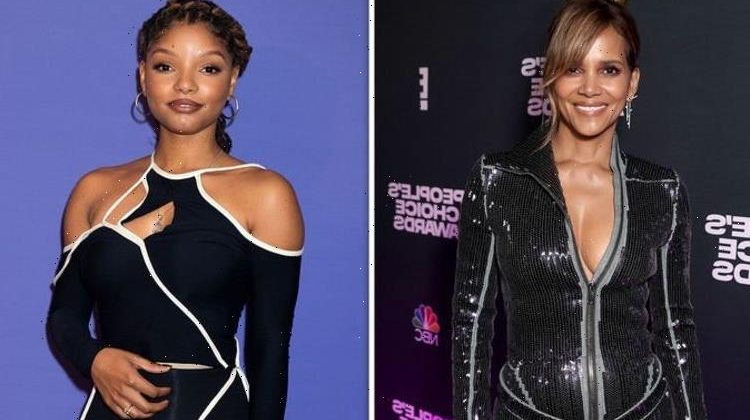 Oscars: Halle Berry shows off new haircut ahead of ceremony

Former Bond Girl Halle Berry, 55, was mistaken for up-and-coming Disney actress Halle Bailey, 21, after a fan sent a tweet to the wrong person. The fan in question will undoubtedly now be feeling slightly red-faced, although Halle seemed to take it all in very good humour.

Yesterday evening Halle Berry shared a video of herself with her 541,700 Twitter followers.

The video was a montage of her many glamorous red carpet looks over the years.

She captioned it “stepped” with a Face Throwing a Kiss emoji.

While many fans rushed to the comments section to praise the stylish actress, one person seemed to be under a false illusion that she was someone else.

“Can’t wait to see you under da sea!” Twitter user Whad_Chitman tweeted out in response to the video with a Mermaid emoji.

The fan clearly meant the tweet to be aimed at singer and actress Halle Bailey, who will be playing Ariel in Disney’s upcoming live-action production of The Little Mermaid.

Nevertheless, the Monster’s Ball star seemed to see the funny side, replying: “… Wrong Halle lol. I can’t wait to see her too though!”

A lot of people in the comments section appeared to be highly amused by the mistake, with SenjutsuSage writing: “I was dying when I saw that, and immediately realized the mistake.” (sic)

“LMFAOOOO I be almost mixing they names up too,” added Nanipbe with laughing and crying emojis. (sic)

Meanwhile JRW_SocialMedia commented: “Gotta love being confused with someone 30+ years younger than you, though! Says a lot about how gracefully you have aged!”

“Lol you can be the Grown Up Version in The Sequel. Be A Part Of Her World Earth globe americas,” added Brian Hayes.

Bailey is one half of the sister-singing R&B duo Halle X Chloe, whose hits include Forgive Me and Do It.

Previously, her role as Skyler Forster in the television sitcom Grown-ish has earned her a nomination for Outstanding Supporting Actress in a Comedy Series at the 2020 NAACP Image Awards.

The star will be making her big Disney debut in May 2023, which means fans will have to wait some time before they can see her on the big screen.

This is not the first time Berry has publicly shown her support for the young star, whose name has no doubt caused people to confuse the pair before.

In 2019 she praised the young actress when it was announced that Bailey would be portraying Ariel in Disney’s latest live-action movie.

Berry tweeted at the time: “In case you needed a reminder… Halles get it DONE.

“Congratulations @chloexhalle on this amazing opportunity, we can’t wait to see what you do!”

Bailey then offered an emotional response to the Hollywood actress, tweeting: “This means the world. Happy to share names with you love you lots.” (sic)

Berry is best known for portraying Leticia Musgrove in Monster’s Ball, Storm in the X-Men films, the titular role in Catwoman and Jinx Johnson in James Bond film Die Another Day.