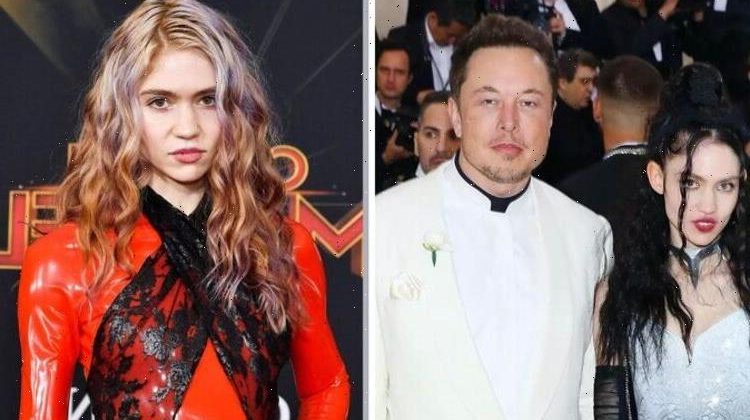 Grimes, 33, whose real name is Claire Elise Boucher, has let it be known that her and Elon Musk have split once again after the two welcomed a new baby via surrogate. The star announced the news as her youngest, Exa Dark Sideræl Musk began crying.

When asked if she had decided to try again with the relationship, Grimes said that she “would probably refer to him as her boyfriend” but added that they were “fluid.”

Grimes explained that she and Tesla giant, Elon, 50, were best friends and live in separate houses, but see each other “all the time.”

Despite conceding that not everyone understood their relationship, she told Vanity Fair that they were “happy” nevertheless.

“This is the best it’s ever been… We just need to be free,” she said.

“Me and E have broken up *again* since the writing of this article haha, but he’s my best friend and the love of my life, and my life and art are forever dedicated to The Mission now.

“I think Devin wrote that part of the story rly well. Sique – peace out”.

Grimes explained: “Ps ‘The Mission’ is ‘Sustainable energy, making humanity a multi-planetary species and the preservation of consciousness.’”(sic)

She attempted to keep the couple’s second child a secret, but the news inevitably broke when her child began crying during the interview with aforementioned publication.

She said at the time that she “didn’t know what I was thinking”.

The singer said: “I don’t know. I don’t know what I was thinking,” when she addressed keeping the baby news secret.

She added: “She’s a little colicky too.”

She explained that she wanted her daughter’s privacy to be respected as she wants her to have as “private a life as possible,” and added a white heart emoji.

Grimes said: “I didn’t mean for them 2 find out about my daughter so please respect her privacy.

“I’d love her to be able to live as private of a life as possible.”

Fans took to the comments to congratulate her on their daughter and wish the couple well.

Eljiagh244 wrote: “Congratulations to a special mom and dad and their precious daughter.”

Spotnik3333 said: “Congrats on momming some more, hope it’s a bunch of adorable fun,” with a pink heart emoji.

One fan quipped about how they haven’t shared any pictures of their new child despite having shared them of their son X Æ A-Xii.

“I respect your choice but since we’ve seen X it would be cool to catch a glimpse of Y,” they joked, with a crying with laughter emoji and a white heart emoji.