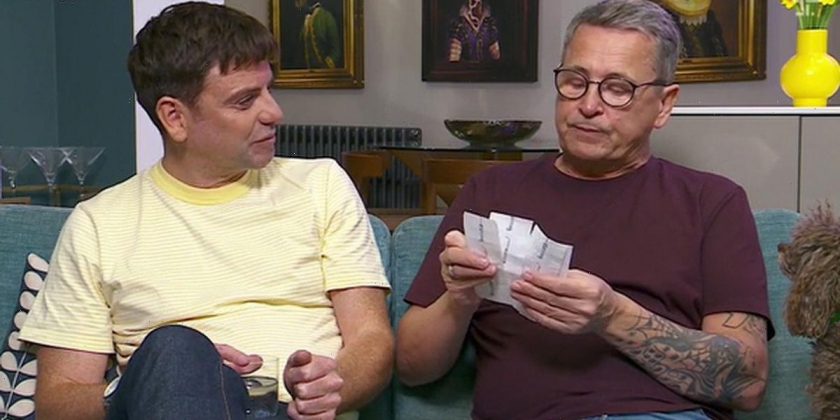 Gogglebox's Stephen Webb and Daniel Lustig dusted off their wedding suits as they attended a garden party at Buckingham Palace.

The reality TV stars are firm fan favourites with viewers of the popular Channel 4 programme, with their sly digs and witty comments about all the week's best television.

The couple have were married in 2018 and luckily four years on their wedding attire still fits, although Stephen did admit his suit might be "on the snug side".

Posting a video on Instagram to document their visit to the Not Forgotten Garden party at Buckingham Palace, Daniel said: "I'm pleased to say we're both back in our wedding suits.

"Albeit, mine's a little bit on the snug side."

Daniel shared a snap on his Instagram profile as he enjoyed a drink before he headed to the charity event, which supports wounded, injured and sick serving military personnel and disabled veterans.

Followers flooded the comments to swoon over the pair as they posed in their special suits.

One said: "How marvellous ! Have a fab time x" While another added: "You both look very handsome x"

A third commented: "You both look gorgeous!"

Recently, Gogglebox was recognised at the 2022 BAFTA Awards, picking up the gong for best Reality and Constructed Factual, beating the other nominees of The Dog House, Married At First Sight UK and RuPaul’s Drag Race UK.

However, just because we love Stephen, Daniel, and the cast of the hit show it doesn't mean everyone else does.

In fact, viewers spotted an awkward moment at the awards ceremony when several A-List actors refused to clap for Gogglebox's win.

As the show’s creator Stephen Lambert and some of the main cast went on stage to accept the award, the camera panned across the audience and some of them didn’t bother to clap.

Lee who normally appears with his best friend Jenny took the podium first to say a few words about the show.

He also cracked a joke about a duck referencing an X-rated clip from a recent episode of the reality series that left Gogglebox viewers in shock.

However, the audience didn’t laugh and instead they sat in silence for another moment, which did not go unnoticed by viewers.

One viewer quipped that the duck joke went down like a “lead balloon” on Twitter with the live audience at the awards ceremony.

Another fan tweeted: "The audience seem quite snobby not wanting to clap for Gogglebox winning at the #Baftas LOL."

A second added: "Snobs not clapping for gogglebox."

A third viewer wrote: "#BAFTAS that went down like a lead balloon … And they walked off quickly… Hmmmm."

Stay up to date with all the latest on Gogglebox by signing up to OK!'s daily celebrity newsletter.