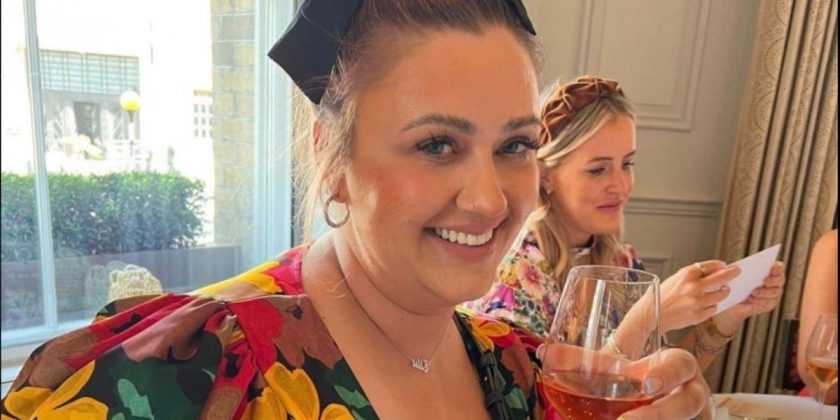 Gogglebox star Ellie Warner couldn’t hide her joy this weekend as she enjoyed a glammed up day out in London with a friend.

The 31 year old Leeds native appears on the popular television show alongside her sister Izzi Warner, but was forced to take a break from filming earlier this year after her partner Nat Eddleston was struck by a car while on a night out.

Despite being critically injured during the hit and run incident, Nat is now thankfully on the mend, and Ellie is once again enjoying a little dose of normality as she was spotted drinking and smiling with friends after a very difficult year.

A far cry from her more casual attire at home, Ellie was glammed up to the nines for the occasion, as she sported a multicoloured floral frock incorporating a tropical colour scheme.

Alongside the dress, Ellie wore her hair tied up into a bun, which was further finished by the addition of a black bow.

To help pull the already fashionable outfit together and elevate it a little more, Ellie completed her look with a pair of earrings, an Apple Watch and a necklace bearing her name.

However it was her £1,700 Gucci Marmont matelassé mini bag that many fans thought stole the show, with Ellie having opted for the classic and timeless piece as she enjoyed a glass of wine with her pals.

Unwinding with her friends at the Roux at the Landau, Ellie was all smiles as she sipped on glasses of wine and tucked into the gourmet menu of French cuisine.

Alongside a series of snaps that highlighted her day out, Ellie wrote: "You can take the girls out of Yorkshire. Thank you to my wonderful friend Vicky for organising such a fab day.”

Following the post, fans immediately rushed to compliment the star and to wish Nat well on his continued journey towards recovery.

While another said: "You look gorgeous Ellie as always! Hope your partner is recovering well…”

Before a third added: "Ellie you little stunner!”

After a six week break to focus on Nat’s recovery, Ellie returned to our screens on Gogglebox back in May.

The happy couple’s world had been rocked on Friday March 18, after Nat was struck by a car while enjoying a night out in Halton, Leeds with his friends.

During the collision, Nat suffered catastrophic injuries and was left fighting for his life in intensive care after suffering a broken neck, back and two collapsed lungs.

Initially he had been placed on life support, with many of his loved ones fearing the worst – but thankfully Nat was able to pull through, and was later discharged from hospital to continue recovering at home, with Ellie by his side every step of the way.

For all the latest showbiz stories, sign up for OK! 's daily newsletter here .