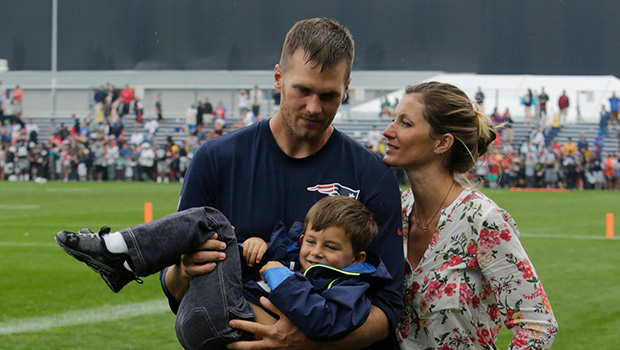 It’s no question who Tom Brady’s number one fan is! Gisele Bundchen went wild yesterday when her hubby led the Patriots to become the 2019 AFC Champs!

Gisele Bundchen may not have been at the New England Patriots vs. Kansas City Chiefs game last night, but she let it be known she was cheering her hubby Tom Brady on! The stunning model took to her Instagram stories to show herself celebrating the Pats 37-31 overtime win, while rocking Tom’s number 12 on her back. In one story, in the midst of the game, Gisele shared the aftermath of a touchdown, with a  “TOUCHDOWN” gif and an added Gif of her husband celebrating, as she jumped around screaming “YES!” In another video, Gisele went wild, when the Pats clinched the win, screaming and high-fiving her daughter. She also shared Tom’s post-game interview with hearts around her husband’s face, as he said to the interviewer, “I just want to say hi to my wife,” and Gisele replied,  “Love you baby.” GOALS!

Following her frenzied Instagram celebrations, Gisele posted a congratulatory message on her Twitter, writing, “So proud of you my love. Congratulations to you and your teammates for a incredible win !!!” with several clapping emojis. The Patriots’ win gave them a highly-coveted spot in the Super Bowl, where they will play against the Los Angeles Rams, who defeated the New Orleans Saints in the NFC Championship, after a controversial call. The Super Bowl will be played on Sunday, February 3 at the  Mercedes-Benz Stadium in Atlanta, and this marks the Pats’ third appearance in a row, and Tom Brady’s ninth Super Bowl appearance in his career.

We’re already looking forward to see Gisele and her kids cheering on Tom at the Super Bowl! Last year, the model faced some backlash when reporter said he overheard Gisele telling her children, “Sometimes you have to let other people win,” after the Eagles defeated the Pats. “Their whole life, they never won a Super Bowl. You have to let someone else win sometimes,” she continued to her kids, Benjamin, 8, and Vivian, 5, according to the reporter. However, Gisele fired back on Twitter, writing, “Just to be clear. No one “let” anyone win. People win because of their own merit. Tired of people twisting my words to create drama that doesn’t exist!”