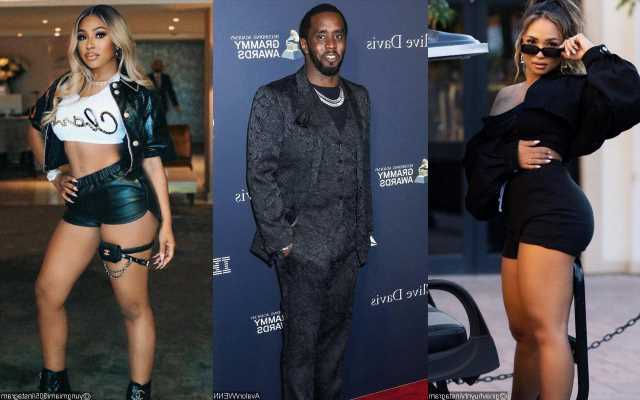 The ‘Shake My A$$’ raptress posts and deletes a picture of a mystery man fondling her chest after her ex Diddy admits to dating the City Girls star on her show ‘Caresha Please’.

AceShowbiz –Gina Huynh appears to respond to Sean “P. Diddy” Combs’ clarification of his relationship status with Yung Miami. Seemingly trying to get the attention back to her, the Vietnamese-American model has shared a suggestive selfie featuring her and a mystery man.

In the now-deleted Instagram Story, Gina got cozy with the man, whose face is not seen as he appears to stand behind her. He placed his hand underneath her barely-there top to caress one of her breasts, while the 30-year-old beauty smiled to the camera and took the picture.

It’s unclear what message that Gina was trying to send with the photo, but many linked it to Diddy’s recent confirmation that he’s dating Yung Miami. “She real pressed about Miami and Diddy convo,” one person reacted to the racy picture. Another similarly commented, “She must be tired of seeing clips of that interview.”

A third person mocked Gina, “It’s giving desperate.” Another echoed the sentiment, “here’s the attention you wanted.” Someone else warned that Gina may reignite her feud with Miami as saying, “City Girls about to Unleash wrath on this woman. god have mercy.” Even NeNe Leakes chimed in as writing, “Chileeeeeeeeeeeeeee.”

Diddy and Miami talked about their relationship on her new podcast series “Caresha Please“. In a video released on Thursday, June 10, the hip-hop mogul said, “I’m single. But I’m dating, I’m just taking my time with life.”

When pressed by the City Girls star, “So what we is?” the 52-year-old rapper responded, “We date. We’re dating. We go have dates, we’re friends.” He further dished, “We go to exotic locations. We have great times.”

He also revealed what he likes about Miami, “I mean cause you’re authentic. You’re like one of the realest people I’ve ever met and you’re authentically yourself. You’re a great mother and a great friend. We just have a good time.”

“I get advice from Caresha,” he further gushed about the Miami native, whose real name is Caresha Romeka Brownlee. “Caresha tells me [things] like, ‘Don’t be in ya head.’ You’re just a good friend. Everybody that’s a friend of yours will tell you that you’re a great friend.”