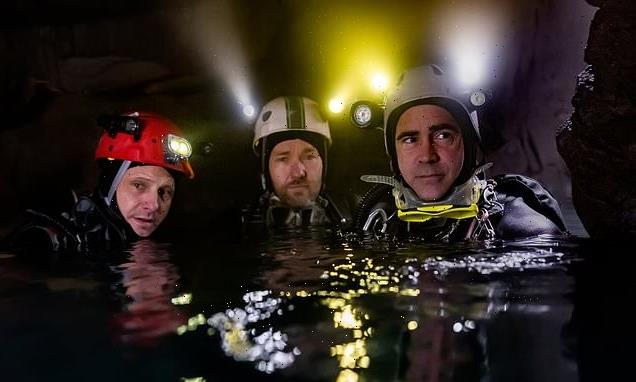 Verdict: Worthy, but a slog

That expression ‘the world held its breath’ gets bandied about a little too much. It was certainly true of the Cuban Missile Crisis 60 years ago this autumn, but it’s not often that a story generating unbearable tension has the entire planet in its grip.

Four summers ago, however, it didn’t seem like hyperbole. The desperate plight of 12 boys and their coach, trapped for more than a fortnight in a flooded network of caves in northern Thailand, touched hearts and minds all over the world. (They had gone in there after football practice, intending to stay for just an hour or two, but then a torrential rainstorm struck.)

So the challenge facing director Ron Howard in dramatising the story of the rescue operation, is to make it somewhere near as tense as the vividly remembered real thing. Does he succeed? Yes and no, but mostly no.

Thirteen Lives is a highly creditable film, but creditable is not quite the same as captivating or compelling. Technically, it is very skilfully done. After all, Howard has made an acclaimed near-disaster movie before, namely Apollo 13 (1995). 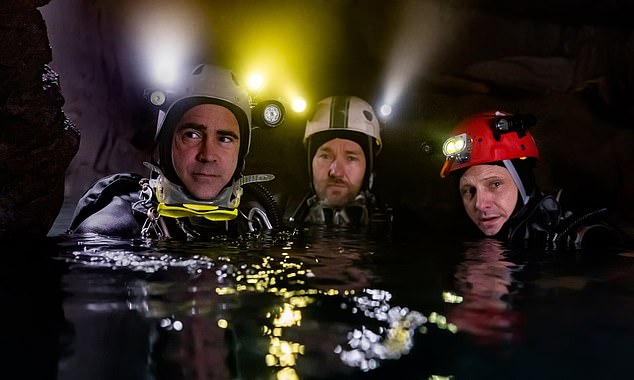 So the challenge facing director Ron Howard in dramatising the story of the rescue operation, is to make it somewhere near as tense as the vividly remembered real thing. Does he succeed? Yes and no, but mostly no

My guess, incidentally, is that in everyday life he gives the number 13 a swerve when he can. In both titles it evokes the possibility, indeed likelihood, of tragedy.

Anyway, in the excellent Apollo 13 he worked hard to create a powerful sense of authenticity, and with one glaring oversight — which I’ll get to — he does the same here.

At times, there’s a distinct documentary feel to Thirteen Lives, drawing slightly unhelpful comparisons with an actual, rather brilliant documentary on the subject, 2021’s The Rescue, by the team who made the Oscar-winning Free Solo. Drama, though, allows stuff like character development.

Madonna, Beyonce and Miss Piggy are among those who have paid due homage to Marilyn Monroe’s immortal performance of Diamonds Are A Girl’s Best Friend. And quite right, too. A dated movie, but still a joy.

Not only is there friction between the two Brits and the Thai divers, but also between each other. Although they are old friends, Stanton is spiky to the point of rudeness, and not averse to pinching his mate’s custard creams, I suppose as a crude way of showing he really does take the biscuit.

Add to that the despair of the families and the rank-pulling by a stony-faced government minister over the region’s kindly, empathetic governor, and there is a lot of story to tell, even beyond the intricacies of the 18-day rescue operation.

Painstakingly, Howard goes ahead and tells it, which is why, at almost two-and-a-half hours, the film itself feels like a slog. Still, just like the floodwater, the tension slowly rises, and sporadically engulfs us.

A doughty Aussie, ‘Harry’ Harris (Joel Edgerton), is summoned not simply because he knows how to dive through caves, but because he’s also an anaesthetist, and the British pair reckon the only way of getting the boys out one by one — carrying them underwater for hours — is to render them completely inert, like parcels.

It really is an extraordinary tale, very convincingly told. Except for one thing. Or rather, two things.

In real life, Stanton is an Essex boy; Volanthen comes from Brighton. Mortensen and Farrell, who are respectively from New York state and Dublin, are fine actors, but think of the number of top-class Brits who could have nailed the accents.

Listening to their occasionally strained vowels — as if Mortensen in particular has spent a couple of weeks idly studying tapes of Ray Winstone — is a torment from which there is, alas, no escape. 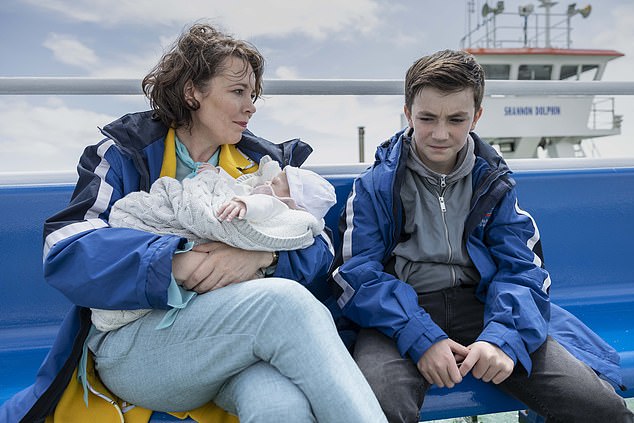 Olivia Colman and Charlie Reid in Joyride. A cheeky 13-year-old, Mully (nicely played by newcomer Charlie Reid), goes and nicks the taxi she’s waiting in, igniting a series of misadventures of varying implausibility

Joyride offers precisely the reverse; Olivia Colman trying to sound all bejeesus and begorrah, and almost getting there, while never quite overcoming the rhythms of her middle-class English speech patterns.

In a way, Emer Reynolds’s film seeks the same formula that made Philomena (2013) such a success. Take a widely admired English actress (in that case Judi Dench) make her as Irish as sweet Molly Malone and plonk her in an odd-couple road-trip through the Emerald Isle.

Here, Colman plays an unstable solicitor, Joy, who has just given birth to an unwanted baby. She intends to let her best friend adopt the infant, en route to Kerry airport for a flight to Lanzarote.

But a cheeky 13-year-old, Mully (nicely played by newcomer Charlie Reid), goes and nicks the taxi she’s waiting in, igniting a series of misadventures of varying implausibility.

He’s grieving for his lovely mum and on the run from his rascally dad with some stolen money; while she’s lugging all kinds of emotional baggage, so as they clash and then predictably bond across the generation gap, there are serious issues to confront. Yet the film somehow undermines its own bittersweet narrative by working so very hard at being whimsical.

There are some nice moments and the odd cherishable line, but for me, forced Irish whimsy always tastes like flat Guinness.

No punch of Batman’s, no swipe by Catwoman, is half as powerful as the impulse to make money out of us, and in the case of DC League Of Super-Pets (HHHII, PG, 106 mins), it’s as dispiriting as it is predictable to read about the new range of merchandise (including pet accessories and furniture) being rushed out in a tie-up with Fisher-Price.

As for the film, the voice cast includes Dwayne Johnson, Kevin Hart, and Kate McKinnon, and it’s moderate fun, even if the actual animation is pretty uninspiring compared with what Pixar are doing. Basically, Superman’s devoted hound Krypto (Johnson), while lamenting his owner’s disloyal new attachment to reporter Lois Lane (Olivia Wilde), reaffirms his doggie worth by tackling the dastardly plans of an evil guinea pig (McKinnon) bent on world domination.

The script by director Jared Stern and John Whittington (the team behind 2017’s The Lego Batman Movie . . . oh yes, I forgot plastic-brick superheroes), overflows with daft puns and jokes aimed squarely at grown-up chaperones and it all yaps along watchably enough.

The best release of the week by far is an Iranian-language film, Hit The Road (HHHHI, 12A, 93 mins), a remarkably accomplished debut for writer-director Panah Panahi about a family driving urgently through Iran towards the Turkish border because one of them needs to flee the country for, we presume, political reasons.

Really, those reasons don’t matter. This is a film celebrating the universality of family dynamics — profound love, and endless squabbling — while also lamenting the way in which families can be broken apart.

Despite a strong undercurrent of sadness, it’s an absolute charmer. I was hooked from the opening scene, in which the irresistibly cute but unstoppably naughty little boy mischievously hides his father’s mobile phone down his pants. In fact, the whole picture is worth watching for his performance alone.