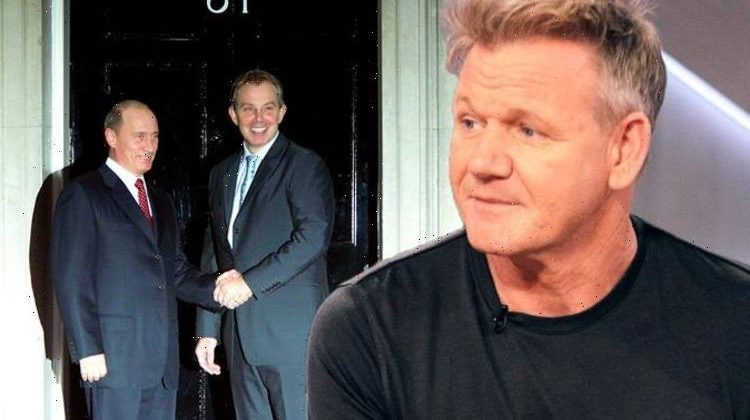 Famous chef Gordon Ramsay, 55, appeared on US programme The Kelly Clarkson Show, where talked about the most intimidating cooking experience of his life. Gordon told host Kelly, 39, that he was terrified by the prospect of cooking for two of the most powerful leaders in the world at that time.

Talk Show presenter Kelly started by asking Gordon to name “the most intimidating person” he had ever cooked for.

Gordon replied: “I remember being invited to Downing Street to cook for Tony Blair and President Putin.

“I genuinely did s*** myself. I was thinking ‘Could you imagine if you food poisoned these two.

“Could you imagine the kind of s*** I would get if I took these presidents down.’”

Later on the chef added: “It was quite an extraordinary experience. I was standing in between them to say hello and they were asking me about the English asparagus and I’m thinking ‘Get me the f*** out of here, I’m done.’”

The Hell’s Kitchen star went on to share that he was surprised by the lack of space and basic kitchen utensils at Downing Street.

He explained: “ After I had finished with them I had to go upstairs and cook for the two first ladies in this tiny little flat.

During the strange dining experience, Putin and Blair tucked into a menu that included tomato consomme with golden caviare from albino sturgeon, mosaic of chicken and ham knuckle, roasted slice of sea bass on crushed new potatoes with white asparagus in a red wine sauce, and treacle tart.

The notoriously tough chef also told Kelly that the most high-profile person he had ever had the pleasure of cooking for was the late Princess Diana, who visited his restaurant in Chelsea.

Recalling the “amazing moment”, he called the “gracious” Diana a “wonderful lady” and noted that it was an “incredible six minutes at the table” that he would “never forget”.

The star has previously discussed cooking for Putin on The Late Show with Stephen Colbert in July 2018.

During the interview, Gordon made reference to the food, saying: “If I ****ked that one, I’d be in trouble, right?”

In response, Stephen made an ominous reference to Gordon being poisoned, joking: “He might feed you something bad!”

Putin has fallen out with the British government after being accused of poisoning in the past, including Alexander Litvinenko, who died in 2006 after he defected to the UK and began working for MI6.

Gordon admitted that he was under a lot of pressure to execute everything perfectly during the meal.

“Make sure the seasoning’s on point. Quite nerve-racking, but at the same time instrumental…”

Nevertheless, Gordon went on to reveal that he could breathe a sigh of relief at the end of the meal, saying: “He loved the food, by the way. Cause he’s a tough cookie.”