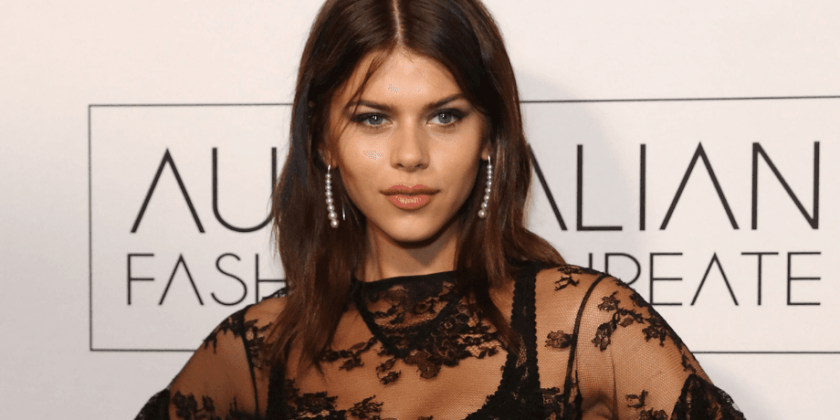 Victoria’s Secret model Georgia Fowler shared some photos on Instagram from her shoot for CostumeMagazine, which is a Danish fashion publication. The cover photo shows Georgia wearing a nude leotard with a high neck and a blue blazer, along with a chunky stone collar necklace. She noted on Instagram that the photos were “shot in just a few hours in Paris || what a team for nailing this one out! Love it so much”.

Another photo for the magazine showed Georgia reclining back in a chair with her eyes closed, as she sipped on an orange drink. She wore a long-sleeved green leotard with side cut-outs.

But the most revealing shot that Fowler’s shared so far on Instagram shows her wearing a light yellow-green long sleeved shirt with a peach-colored miniskirt. She put her left leg against a pole in the street, as she grabbed the top of the pole with both of her hands. Georgia looked at the camera with a serious look on her face, as she showed off her derriere. The model sported some blue sneakers, and captioned it, “And… don’t forget to stretch.” Fans said, “I’m in love w u,” “loving the matching light blue shoes and shutters, great shot,” and “Keep Shining Girl…”

In addition to Costume, Georgia shared a shot for Vogue where she posed for Cartier. She wore very minimal makeup for the photo, as she slightly bit down on her left thumb. She sported a large ring on her finger, along with a shiny bracelet on her left wrist. The bracelet was out of focus, but had four white, sparkly bands that connected to a flower centerpiece with pink sparkly bands. Her pink sweater matched the jewelry.

Another picture from the Vogue shoot showed Georgia posing against a black wall with her hair slicked back. She wore a leotard with a nude accent on the top, with black on the bottom. The model also wore a large, white coat on top with a belt accent on the waist. This image was captioned “Vogue Australia x Chanel.”

Previously, Fowler opened up to Vogue UK about some of the challenges of being a public figure. One thing she noted was that dating could be harder.

“It’s hard enough as it is. Then you get added pressure put on and it can create difficulties. Many other people are overthinking it, when all you just want is to just have fun.”